We’ve reached the mid-point of 2021, evident by summertime’s long days and glorious evenings! I hope you are out and about, enjoying this special season with your family and friends.

Today, I wanted to offer a brief summary of how the economy and markets have performed over the first half of the year.

Capital markets were largely positive during the first half of the year. Helping drive that performance was a stronger than expected first quarter earnings season as well as positive news early in the second quarter on strong retail sales and consumer spending.

Strong First Half for Stocks in 2021

•             Bonds, on the other hand, are still largely negative year-to-date with US Bonds down 1.60% and Global Bonds down 3.21%, with the year beginning in a challenging environment of increasing interest rates.

Over the first half, the economic reopening continued in the US and around the world and helped fuel a broad, but gradual improvement in economic data. 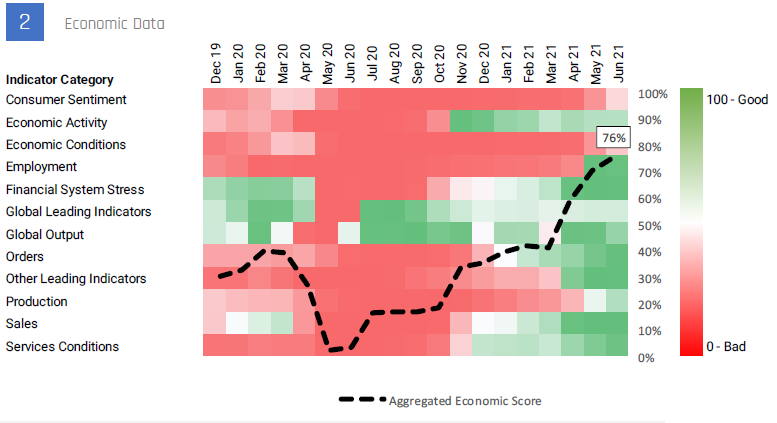 The biggest economic topic was inflation, with a noticeable shift in tone from the Fed.

April and May’s inflation reports came in higher than expected, with May’s CPI at 5.0% versus the year prior. Of that change, Bloomberg Economics estimated that half came from areas sensitive to the economic reopening.

The most recent June release showed an even hotter inflation reading of 5.4%. While this certainty warrants our attention, the increase may be less dire than it appears. One third of this increase was attributed to used car prices, which are widely expected to be transitory. Also, this reading is measuring the change from June of last year, which was the low point for inflation in 2020.

•             In June, the Fed’s expectations for future rate rises was moved up to 2023, with potentially two that year. That is earlier than they alluded to in prior comments, which resulted in numerous headlines but not much of a sustained market reaction.

•             The Fed largely anticipates the growth in inflation to be temporary, as stimulus and supply strains related to the economic reopening get resolved.

•             Economists surveyed by Bloomberg expect inflation numbers to begin declining for the rest of the year with a return to more “normal” ranges, in the low 2% range, by the middle of next year. 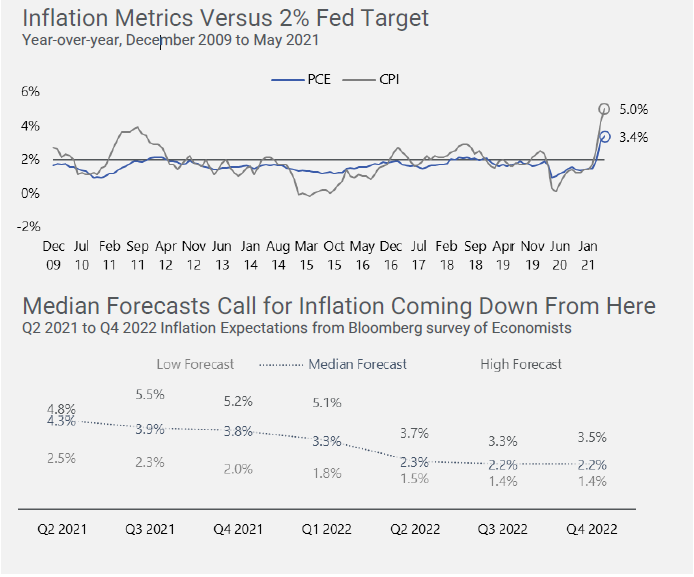 All data as of 06/30/21   Source: Bloomberg, US Bureau of Labor Statistics, Helios Quantitative Research

Despite the US economy having 7.6 million fewer jobs compared to the pre-COVID peak in February of 2020, labor market conditions are tight with a large number of open positions and reports of employers struggling to fill those roles.

The growth in jobs in April and May were lackluster compared to expectations of economists surveyed by Bloomberg, despite there being high numbers of job openings and voluntary quitting.

Anecdotal evidence across the media suggests a combination of health worries, childcare concerns, enhanced unemployment benefits, and wage concerns as to why more people have yet to return to the workforce. Employers struggle to fill open positions despite the continued economic reopening. 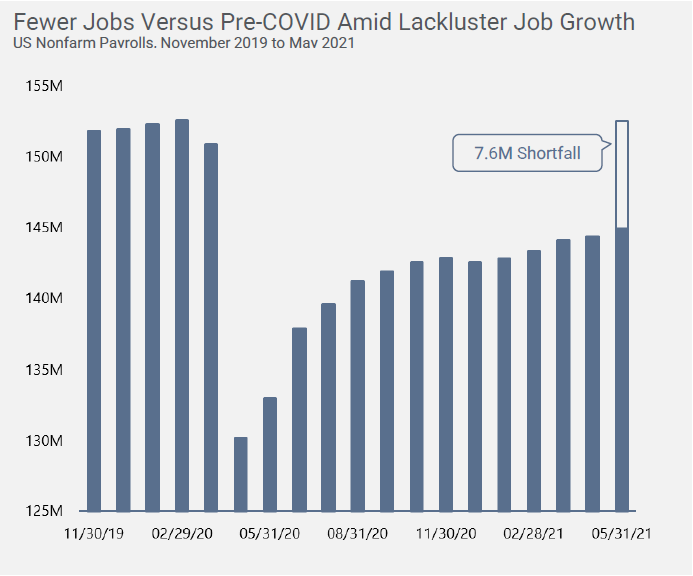 All data as of 06/30/21   Source: Bloomberg, US Bureau of Labor Statistics, Helios Quantitative Research

Despite headline-grabbing inflation reports and broadly improving economic data, yields on most US Government Bonds declined in the first half of 2021. The 10-year Treasury dropped to 1.47% after peaking at 1.74% at the end of March.

Most likely, this signals that the market agrees with the Fed’s view: inflation will be transitory over the next few quarters and widely linked to stimulus and economic reopenings rather than an indication of a broader troubling trend.

The Fed’s comments suggesting a move forward of potential rate increases into 2023 seemed to give the bond market renewed confidence that the Fed would be able to contain interest rates. 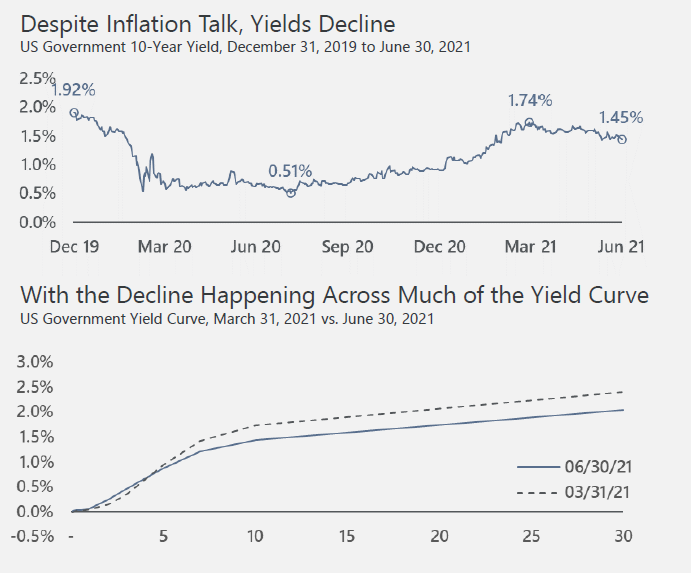 All data as of 06/30/21   Source: Bloomberg, Helios Quantitative Research

You can read our thoughts on how rising rates and inflation may affect your portfolio here.

Strains within global supply chains became very evident, and problematic, over the course of the first half, driving prices upward in several categories.

As the economy reopened, shortages of components needed to manufacture and ship goods worldwide were in short supply. Producers were caught flat-footed at the speed of recovery. While some shortages have been severe, most economists expect the issues to be resolved over the next months.

As anyone who tried to build something this year can tell you, lumber prices skyrocketed in April and May, with rapid home building and supply shortages creating the perfect storm to drive up prices.

Prices remained elevated for much of the second quarter before quickly falling as more supply became available and speculators were squeezed out of their positions. As of July 12th, lumber prices have given up their entire gain for the year. 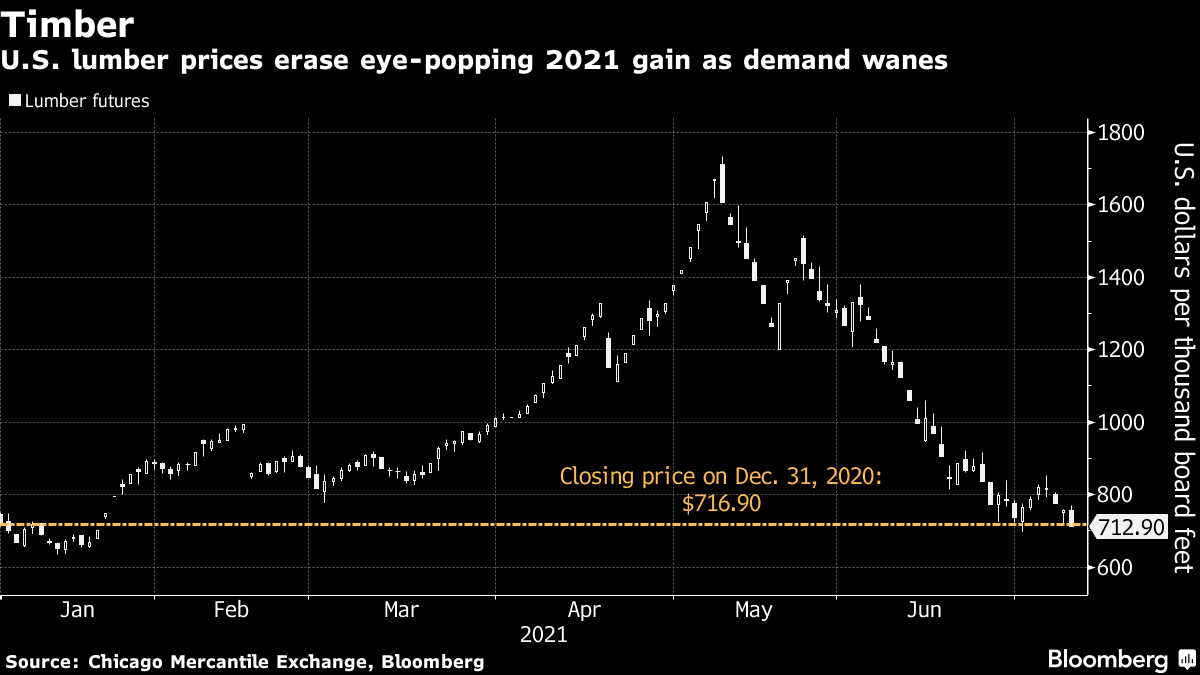 The Biden administration and a group of bipartisan senators agreed to an infrastructure plan to the tune of $1.2 trillion over eight years.

This figure is down from the roughly $2.3 trillion in the initial proposal by the administration, but still calls for significant investment in roads, bridges, transport, and broadband. The plan would be funded by surpluses from other stimulus programs, Strategic Petroleum Reserve oil sales, and increased tax enforcement by the IRS.

In addition, the Biden administration has proposed sweeping changes to the tax code, ostensibly targeting those with the highest incomes and net worth. As is normal in politics, the initial proposal shoots for the moon and was meant as a launching point for further negotiations. You can read about each element of the proposed changes here.

We believe the final plan will likely be a watered-down version of this proposal, but it’s pretty clear higher taxes are on the way. It’s too soon for us to speculate on the final regulations and the impact to your planning, but we will carefully monitor the situation and keep you posted on any developments.

In summary, most risk assets have performed well in the first half of 2021 as the economy accelerated from last year’s recession. The bond market has fallen in line (lower yields) with the Fed’s opinion that higher inflation is temporary. Stock market volatility was relatively tame in the first half with the largest decline in the S&P 500 reaching -4%. The average intra-year decline over the previous 41 years has been -14.3%.1

While both economic and market data remain positive, it’s best to be prepared for increased volatility. Owning a well-diversified portfolio matched to your tolerance for risk remains the surest way meet your long-term financial goals.