Last week was the craziest year. Or, at least it felt like a year.

Since our last post, citizens around the world are practicing social distancing, a term only true introverts took to heart until recently. All concerts and professional sports have been cancelled or rescheduled. Schools are closed or closing.

The stock market has entered a bear market (a 20% or greater drop from previous high) in the fewest number of trading days on record.

You’ve heard all the bad news. Frankly, bad news is easy to find right now. However, I’m going to give you 7 pieces of GOOD news that will help you see the light at the end of the tunnel, both on a societal and economic level.

#1: We have some precedent from other countries that have already “flattened the curve.”

We’re already seeing that some nations, once adequate testing and social distancing measures are instituted, have flattened the curve of new infections.

According to Koyfin, Chinese Large Cap Equities (FXI) initially bottomed “and rallied at the end of January when the growth rate of new cases fell below 20% for several days, confirming the spread was slowing.” FXI eventually followed other markets lower, however, as coronavirus spread to the global economy. 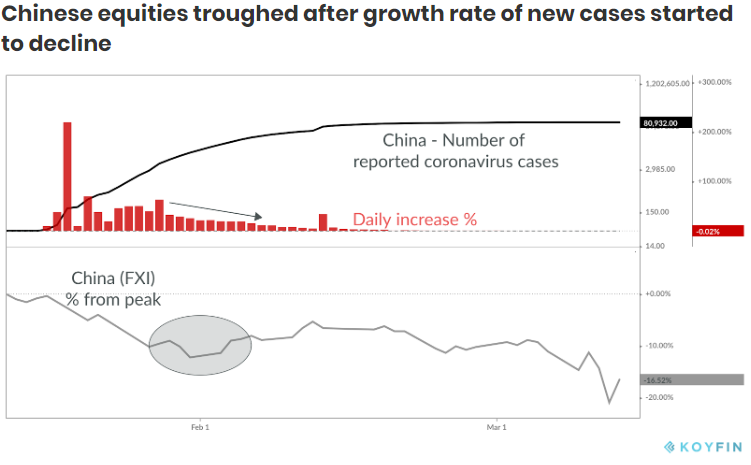 Likewise, in South Korea, they ramped up testing, instituted social distancing, have a similar age demographic and an advanced medical care system similar to the US.

We may be behind the curve in getting started here in the US (more on that in a bit) but South Korea acts as a map to show how things will improve. 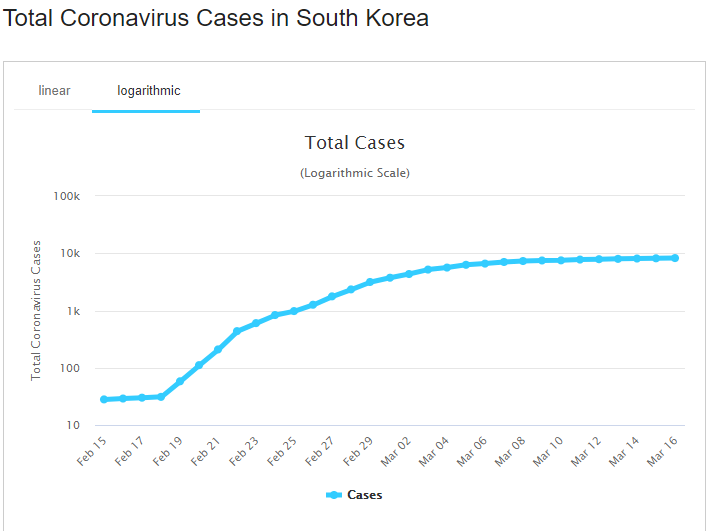 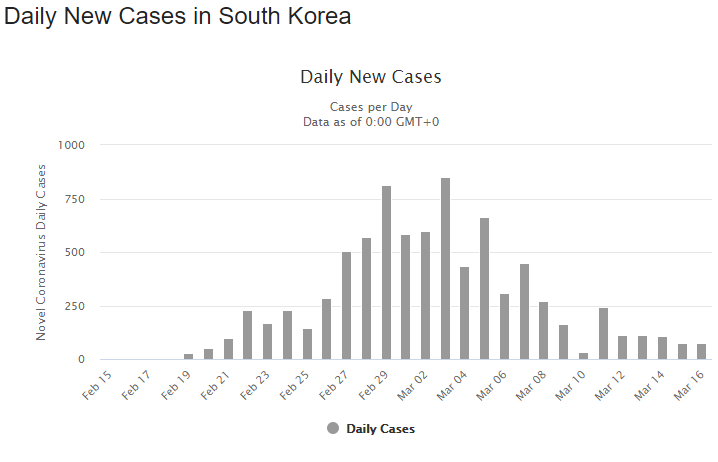 Because of its importance to the global economy, I believe the US stock market likely won’t rebound until similar improvements are demonstrated here. Trying to time the bottom however will be impossible and ill-advised.

Jeremy Grantham, the CEO and Chief Investment Officer of Boston Based investment management firm GMO, said it best in a letter to clients in March of 2009, “Finally, be aware that the market does not turn when it sees the light at the end of the tunnel. It turns when all looks black, but just a subtle less black than the day before.”

Ironically, the letter went out just before the bottom in US equites during the financial crisis.

#2: Successful treatments for the virus will likely come before the vaccine.

According to Karen Anderson, health care strategist for Morningstar, the drug Remdesivir is the first drug to be used in the US and is showing promise. (However, it’s way too early to tell as the key phase 3 data won’t be out until end of March or April).

But we know so far that 14 American patients from the Diamond Princess cruise, all critically ill with an average age of 75, were given the drug. The majority have recovered and there have been no deaths.

Just today, in an article by Reuters, it was announced that another drug has produced positive results in patients.

“Favipiravir has been effective, with no obvious side-effects, in helping coronavirus patients recover, Zhang Xinmin, an official at China’s Science and Technology Ministry, told reporters at a news conference on Tuesday.”

“In a clinical trial in Shenzhen involving 80 participants, patients who took Favipiravir showed greater chest improvement and took less time to test negative for the genomic trace of the virus, compared with patients not given the drug, Zhang said.”

#3: “You can always count on Americans to do the right thing…after they’ve tried everything else.” - Winston Churchill.

Now that we’re finally taking this threat seriously, testing for the virus is finally rolling out at an accelerated pace around the US. Pharma companies are working on a test that can deliver results in 10 minutes.

After much delay, the United States government and leaders around the world are providing fiscal stimulus to citizens. The US is working on a plan to get cash in the hands of Americans within the next two weeks to help pay bills for those effected by the slow down. Just this week, France announced a $50 billion stimulus to support its citizens.

In terms of monetary stimulus, the Federal Reserve dropped the Federal Funds rate back to 0% - 0.25%. It was a move that was supposed to sooth the markets, but that didn’t necessarily happen. The Fed also injected $700 billion into the system to keep things operating smoothly.

We’re finally listening to the directive to stay home, and that means we are closer to the end of this than we were a week ago.

This isn’t just great for those still making contributions to their accounts; it’s great for anyone with a disciplined plan.

During the bull market, we were selling stocks periodically and buying bonds to maintain your target allocations. On the way down, we’re buying stock and selling bonds. This has always been part of the plan. It’s this disciplined and opportunistic rebalancing that has been shown to improve returns and reduce portfolio risk over time.

From Michael Batnick, Director of Research at Ritholtz Wealth Management:

Historically, future returns improved with just about every successive move down.

#5: We came into this rapid downturn with the economy on strong footing.

Remember that this economic event wasn’t caused by a financial crisis. Instead, the economy was strong even two weeks ago. The trade war with China had simmered down with a Phase 1 deal signed by both parties. Unemployment was at 3.5% - the lowest since the 1950’s, and the Fed was still accommodative, cutting rates 3 times in 2019. Further, inflation was moderate at 2.5%.

Just as important, household balance sheets were the best they’d ever been. 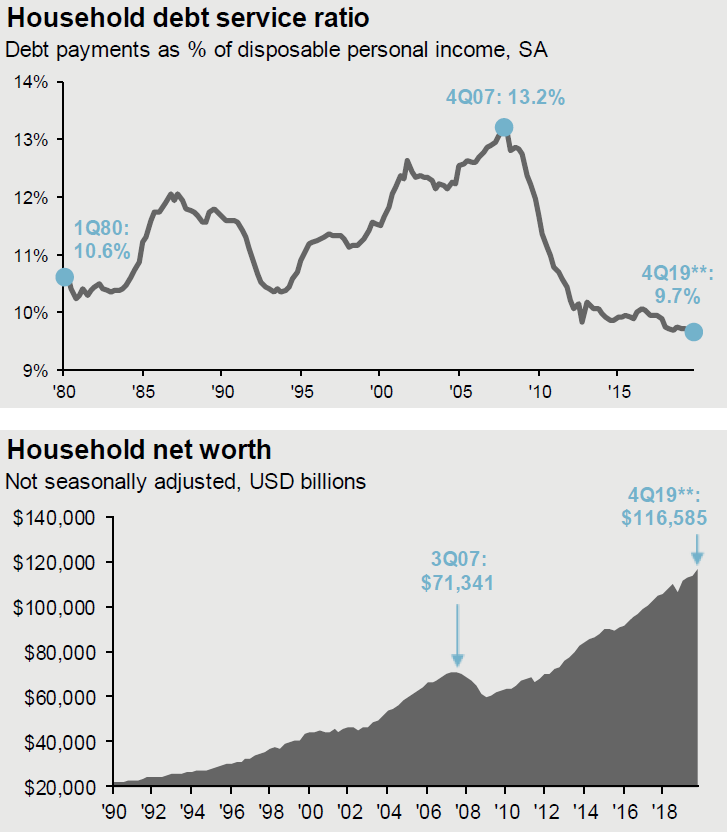 While there will be an unfortunate hit to households (especially to those out of work for perhaps weeks), this gives us a good starting point for the recovery, especially when mixed with strong fiscal and monetary stimulus.

#6: Be ready to hear good news disguised as bad news.

According to some estimates, there are perhaps 5 to 10 times the number of people currently with the virus that have not yet been counted. As testing rolls out, be prepared for the number infected to skyrocket. How is this good news?

It means there are many more mild cases out there where people are recovering on their own. It means the death rate from this disease is likely a whole lot lower. It means an awareness for those testing positive so they can slow the spread via quarantine.

Don’t be surprised by awful economic numbers and disastrous profits from companies around the world when they’re released. This is already being priced into the market. Some of these numbers will also be far less bad, dare I say, some will be way better than expected.

Let’s get the numbers out so there so we know the truth about this thing. Analysts have been left guessing as to what company earnings will be. Let’s know to see how that relates to current stock prices.

During times like this I usually try to avoid social media because negative people are the loudest.

To my surprise, my social feed has been leaning positive the last week. I see people offering help in various ways. I see people complimenting the kindness of strangers in over-crowded grocery stores. I see genuine concern for the elderly who are most susceptible to the virus. I see people reframing this as an opportunity to further educate themselves, learn new skills, or spend a whole lot more time as a family during quarantines.

It’s been almost 19 years since 9/11, but if that horrific time proved anything, it was that when Americans are hit hard, we come together, take care of those around us, and then we get to work building a normal life again.

The toughness and ingenuity that lives deep within the citizens of this country will shine over the next few months. Once again, our healthcare workers are demonstrating that they are the most resilient, committed, and well-trained fighters on the planet.

We recognize this period of time is affecting many of you in non-financial ways as well. I assure you we are not ignoring the negative news and will continue staying abreast of the changing situation.

We will get through this together, just as we’ve done during every other major crisis.

Please reach out if we can be of any help. You can also schedule a call here.