In 1986, Lou Holtz was tapped as Head Coach of the then-struggling Notre Dame Fighting Irish football team. By the time he left the university 11 seasons later, he’d racked up 9 Bowl appearances, 5 Bowl victories, and one National Championship!

He later revealed a vital question that he demanded players repeatedly ask themselves. It goes by the acronym W.I.N. – What’s Important Now? The question serves as a guide to help prioritize choices and decisions in the face of challenges, roadblocks, and complexity. In the middle of a game, this question refocused players by directing them to take the next best action to be successful.

Lou Holtz’s sage wisdom still applies to so many things, including investing.

On June 13th, the S&P 500 officially entered bear market territory, defined as a pullback of at least 20% from recent highs. While global capital markets have been volatile all year, crossing this man-made threshold has the potential to create additional anxiety and nervousness. There’s no doubt it will generate a lot of headlines and discussion around rising risks of a recession, stubborn inflation, and the path forward for the Federal Reserve.

It's worth noting that aside from the pandemic-related pullback in March 2020, the last time the S&P 500 officially entered bear market territory was more than a decade ago.

On the positive side, we’ve experienced 18 bull markets during that same period with an average length of 55 months. Bull market gains ranged from +21% to +936%. The magnitude of the bulls has been much stronger and much longer than the bears. 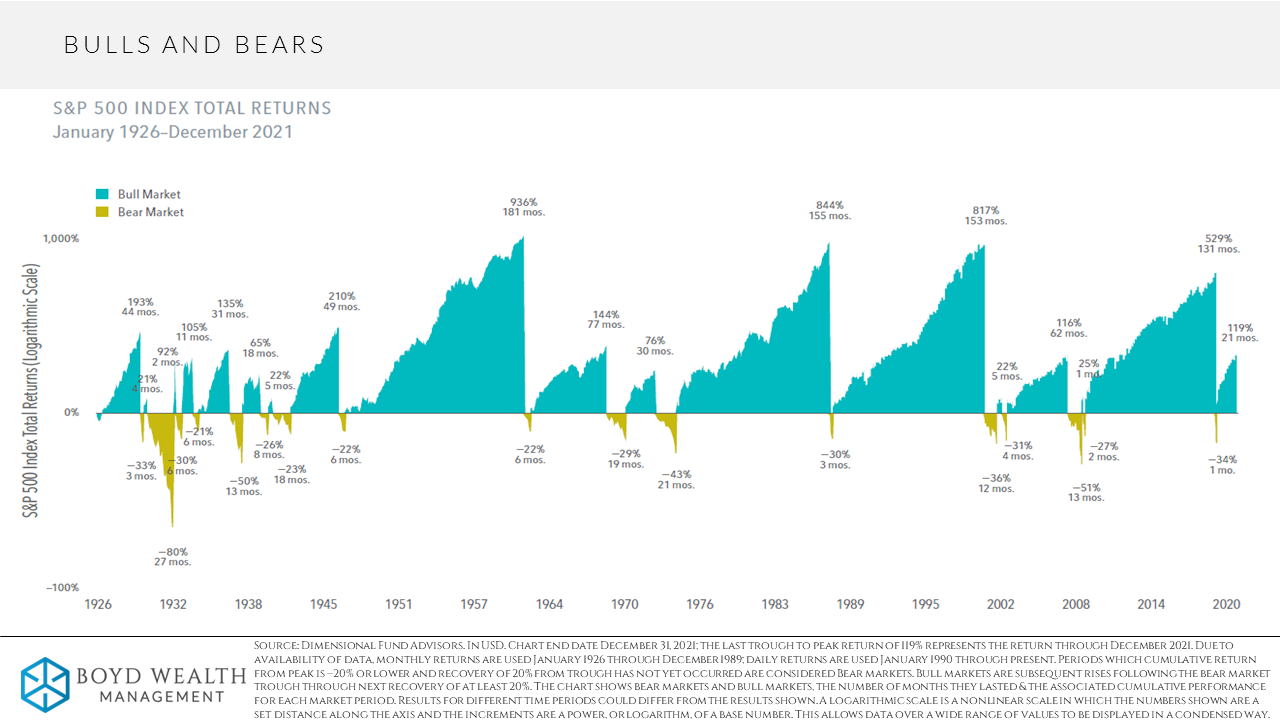 While consumer spending was one of the strongest facets of the economy in the first quarter, with personal consumption rising 3.1%1, there may be some initial signs of cooling. Retail sales fell 0.3% in May2, the first monthly decline of the year. That month, consumers pulled back spending on most non-essential goods, with furniture, electronics, and online shopping hit the hardest. It may be the first indication that consumer resilience is waning in the face of higher prices.

This could bode well for a much-needed peak in inflation, but we’ll need oil prices to settle down as well. May’s Consumer Price Index rose 8.6% over the prior year, up from the 8.3% annual increase in April. Core inflation, which excludes food and energy, did continue to moderate (thank goodness), rising just 6% over the last year versus the 6.2% and 6.5% increases in April and March, respectively. 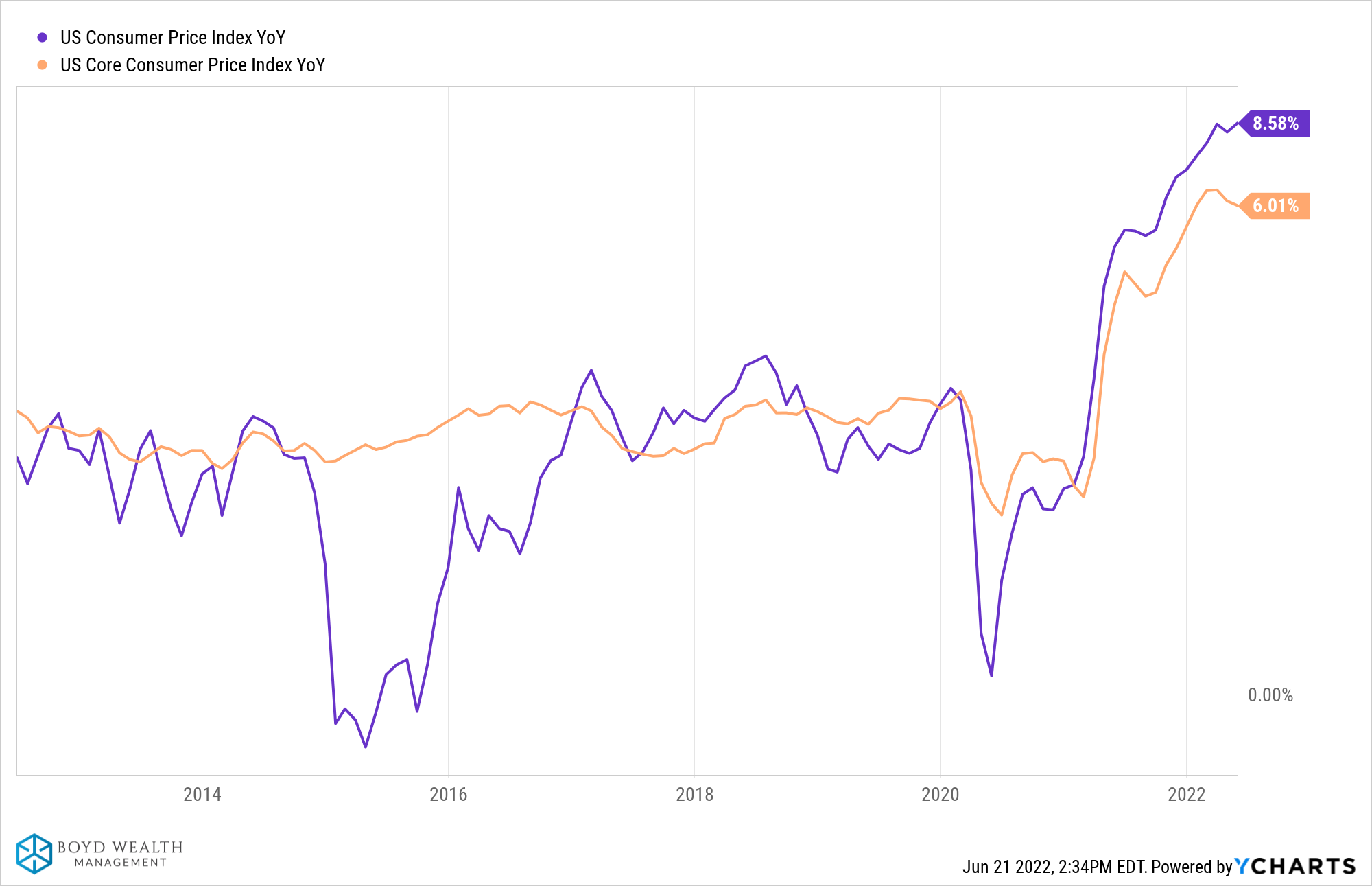 The University of Michigan’s Consumer Sentiment Index slumped to a record low in May’s preliminary release. The impact (and fear) of continued inflation continue to batter sentiment, with 46% of respondents attributing their negative views to inflation.

Ironically, consumer confidence has been a contrarian indicator of stock market performance. The average 12-month S&P 500 return from sentiment bottoms has been +24.9%. We don’t know if we’re now witnessing the bottom for consumer sentiment, but it’s already below levels seen through the last seven recessions. 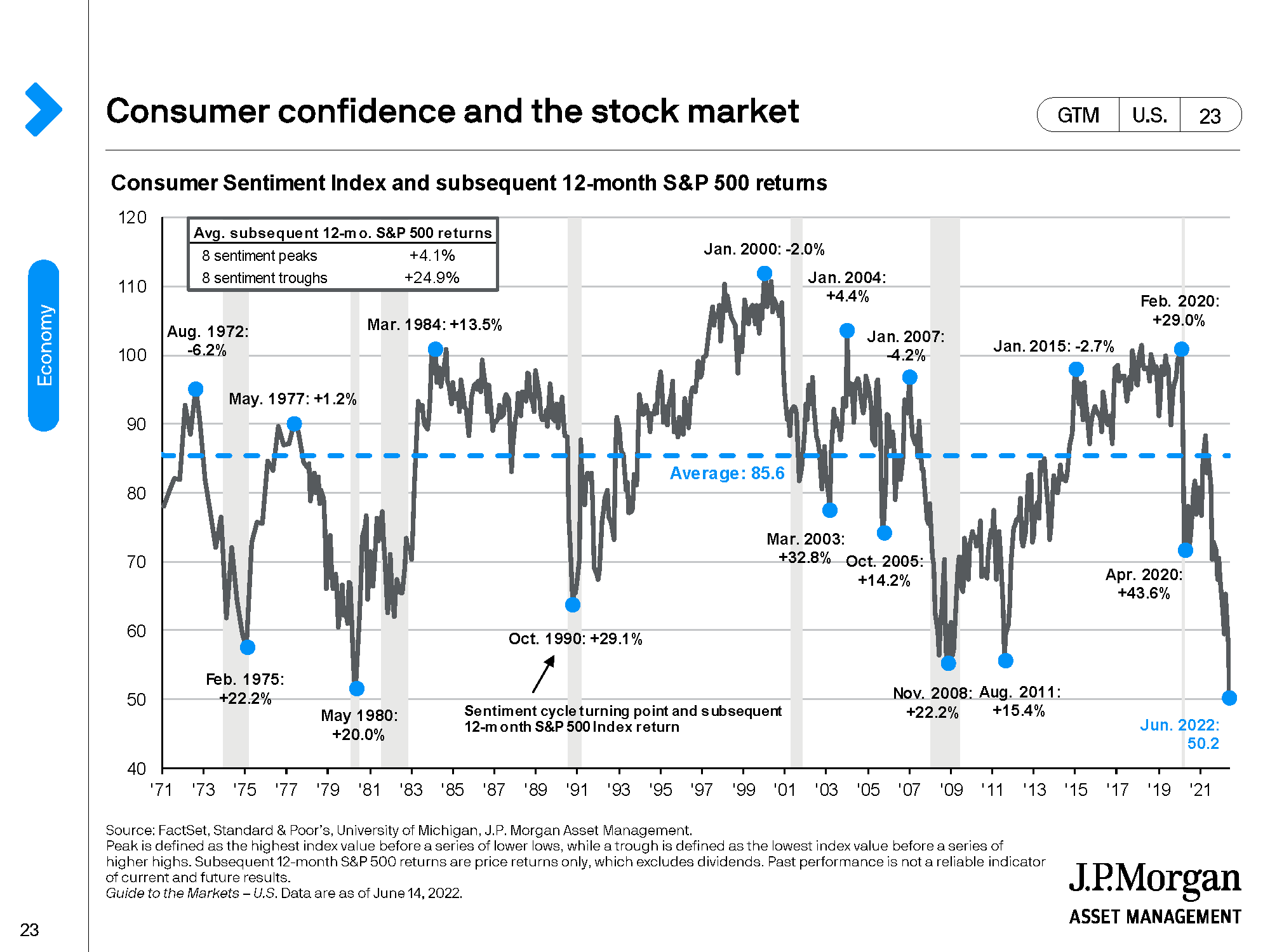 Other historical data points to brighter days ahead. Going back to 1926, the average return for U.S. stocks following a 20% decline has been positive on a 1-year, 3-year, and 5-year basis. 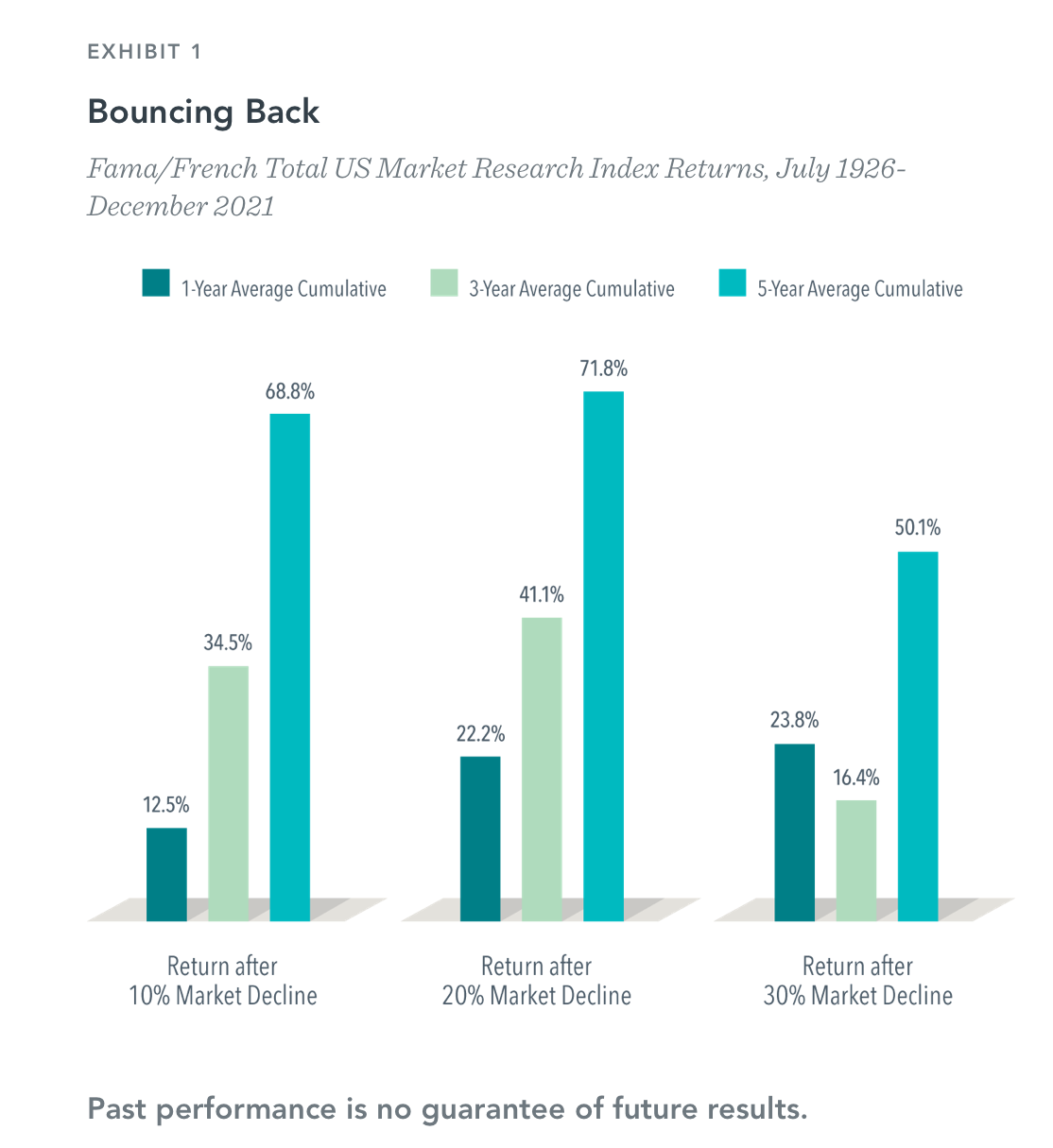 Following their June policy meeting, the Federal Reserve moved more aggressively to tackle inflation by raising rates by 0.75 percent, the largest increase in the benchmark rate since 1994. In his press conference, Fed Chairman Powell indicated that a 0.50% to 0.75% increase is on the table for their next meeting in July as well, but that he does “not expect moves of this size to be common.” The market’s reaction was cautiously optimistic, with the S&P 500 increasing 1.46% on the day of the announcement and yields on 2-year and 10-year U.S. government bonds falling. Expectations around inflation and Fed policy continue to shift and adjust to the latest data, occasionally sparking periods of volatility across global capital markets.

It’s too soon to tell if we are already in a mild recession - or if one is imminent. But you sure wouldn’t know things are slowing down by looking at the labor market, as there are still two job openings for every one person seeking work. 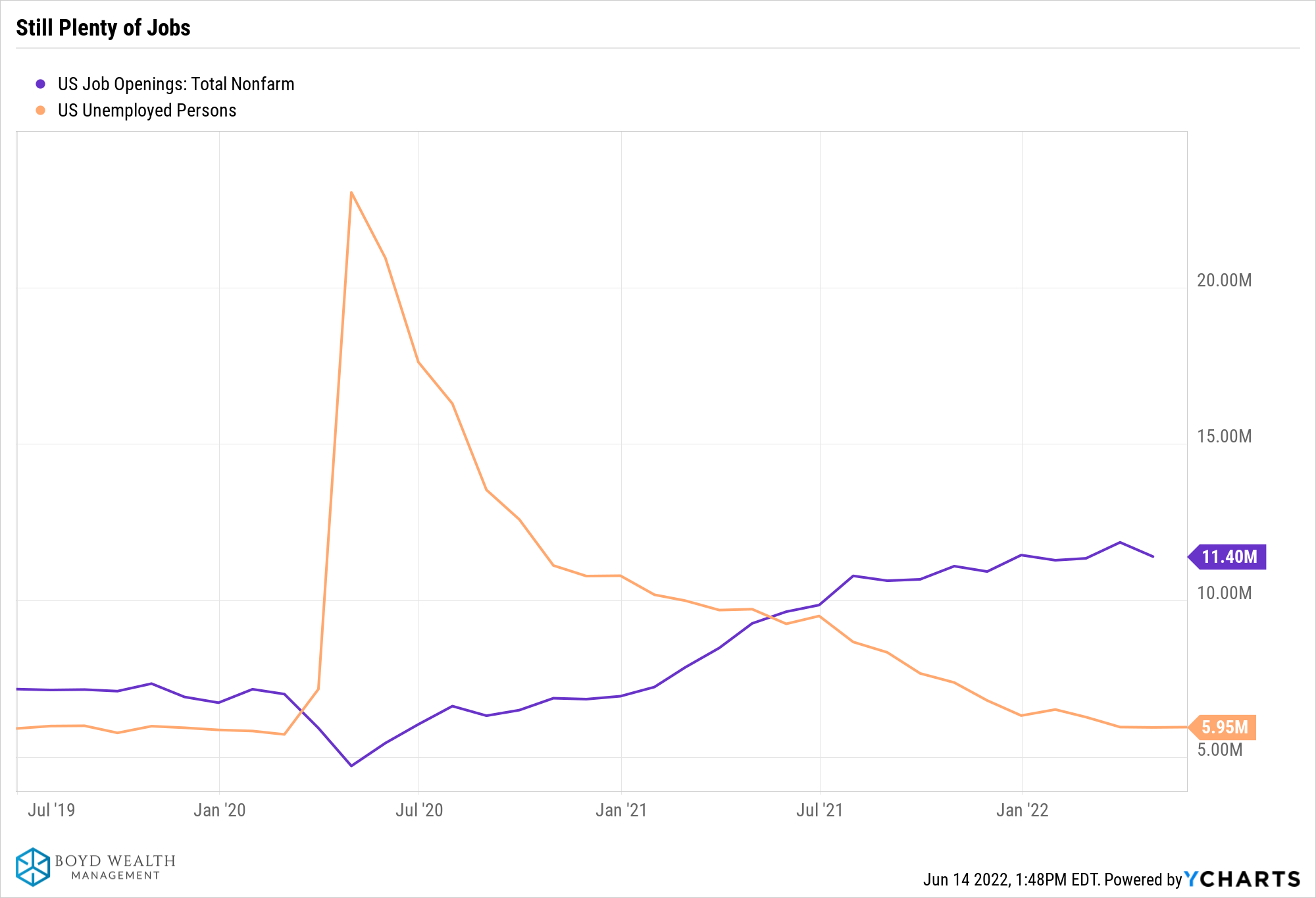 Last month, Brian Moynihan, CEO of Bank of America, reported that "consumers are in good shape, not overleveraged,” noting that bank customers’ checking and savings account balances were larger than before the pandemic.4

Since 2013, the Federal Reserve has conducted its Survey of Household Economics and Decision-making (SHED). In their latest release (May 2022), most of their findings are downright positive. Amidst the doom and gloom, American households are reporting doing better than ever.

In the highest reading since the survey began, 78% of respondents reported they are at least doing ok financially. 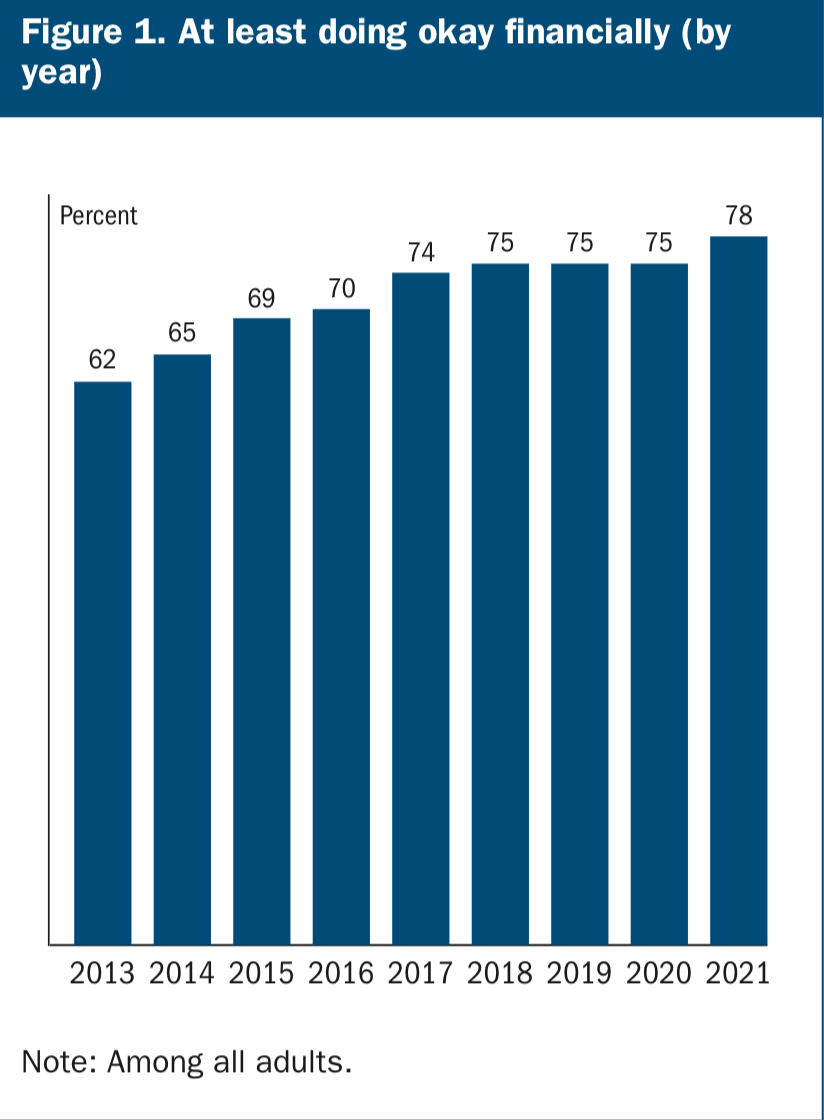 In the spirit of Lou Holtz's iconic Notre Dame teams, what if we asked ourselves What’s Important Now?

Your portfolios and financial plans are built with the expectation that market corrections are normal - and even regular occurrences. I suspect that you’re not surprised by this downturn, as your resilience has been impressive.

When life hands you lemons, make lemonade. Where and when appropriate, that’s just what we’re doing. We’re using this downturn to try and improve your tax situation and reposition the portfolio to take full advantage.

I don’t know if we’re early or late in this bear, but future expected returns are generally a whole lot more attractive at current valuations.5 If you have cash and time, this is the moment you’ve been waiting for. There’s no need to make a big bet - regular dollar-cost-averaging is fine. Call us and we’ll create a plan.

Just like the great Lou Holtz, we’re working hard behind the scenes, so we’d love to hear from you and help in any way we can.