The Costa Deliziosa set sail from Venice in early January, a week before the coronavirus pandemic consumed the world. After 15 weeks at sea, the luxury cruise liner with 1,831 COVID-19-free passengers will end its around-the-world journey next week. Passengers will disembark in Barcelona, Spain and Genoa, Italy into a very different world than which they left.

While I’m sure passengers have been keeping up with the news, imagine their experience as they join the rest of the world under social distancing and shelter-in-place orders – not to mention the shock when they log on and check the financial news.

When they left, the unemployment in the US was 3.5%, ending March at 4.4%. However, as of last Thursday, 22 million people had filed for unemployment since the crisis began. The unemployment rate is now projected to top out in the mid-teens by June, effectively wiping out all employment gains since the end of the Great Recession in 2009.

When they departed for sea, our Gross Domestic Product was 2.1%, and now with an estimated 30% of the world economy shut down, the Q2 2020 GDP average expectation is -4.4%. The first contraction since March of 2014.

On the flip-side, they’re coming back to a world where pollution has been significantly reduced, animal shelters are emptying, and everyone is united against a common enemy.

Since the Costa Deliziosa set sail, volatility in equity markets has exploded.

Remember that volatility is a feature, not a bug. The risk of losing money and tolerating swings in account balances is the driver of long-term returns for stockholders. Stock prices move up or down every trading day, but the magnitude of these moves increases during uncertain times.

Heightened volatility goes both ways. We noted in our previous piece how the sharp coronavirus downturn brought us the fastest bull-to-bear market in history. We cautioned that history has shown market timing is dangerous and even damaging to returns, as upside days typically cluster near deep downside days.

We’ve seen this play out again over the last few weeks. This chart from Bespoke Investments demonstrates the sharp movements we’ve seen this year. It highlights that along with the fastest down movement, we’ve also just experienced the best 15-day performance since May 1933. 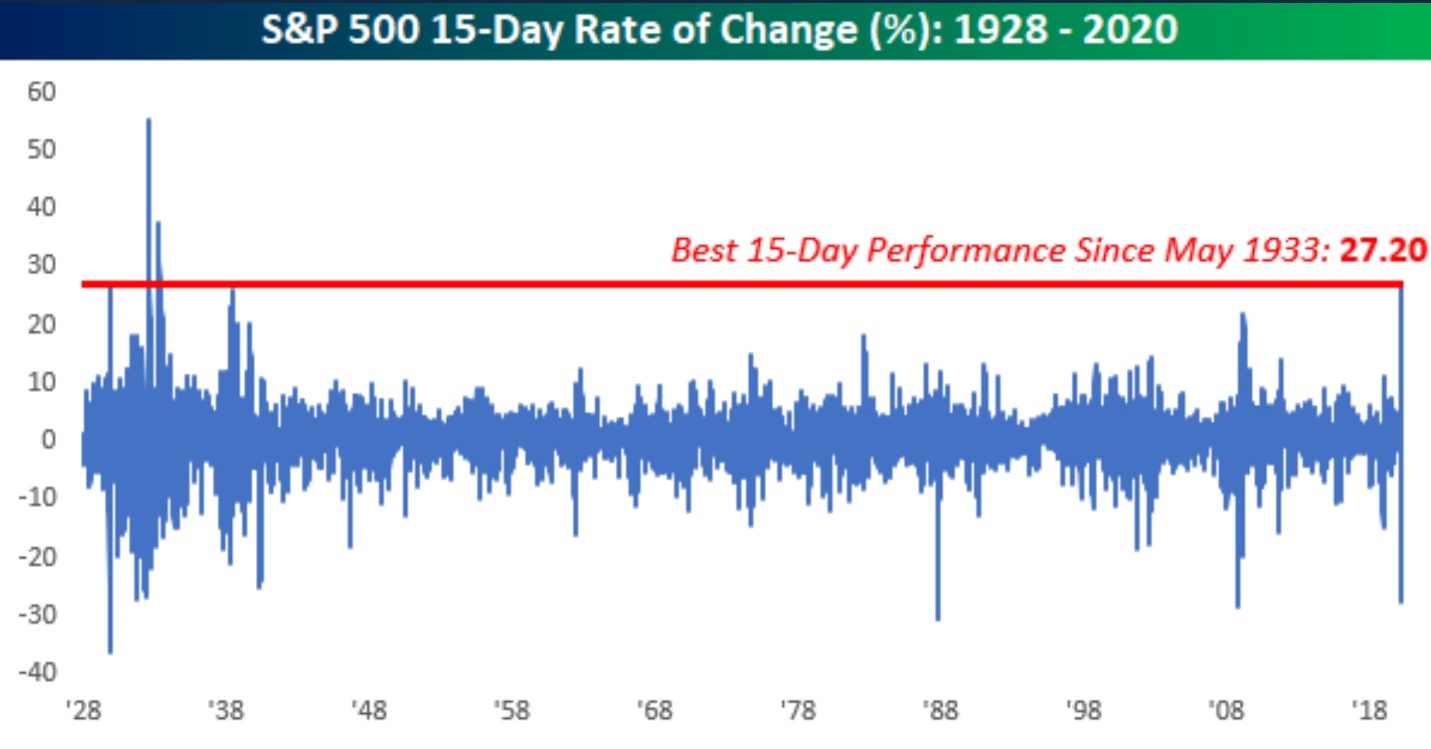 Below, we see year-to-date returns for the S&P 500 along with a proxy for a globally diversified portfolio – Vanguard’s LifeStrategy Moderate Growth fund. 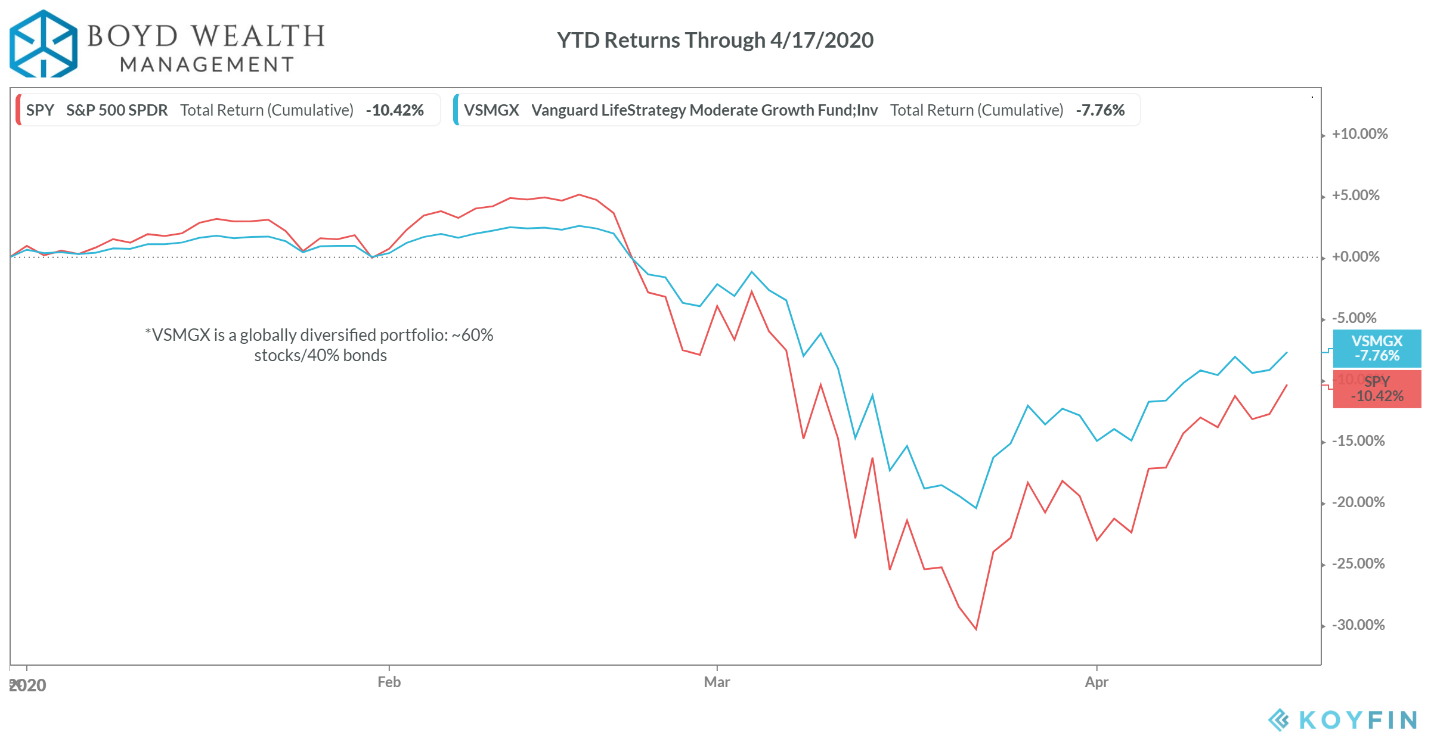 These tanned and well-fed cruise passengers are coming back to portfolios that, at first glance, appear to have been affected by a normal yearly correction.

The historic pullback that began February 20th, found a recent bottom on March 23rd. The ensuing rally is representative of a confluence of factors, as JP Morgan’s Michael Cembalest noted recently, with extreme bearish sentiment, improvement in daily infections in both Italy and New York, and the massive Fed intervention created the conditions for a rebound in equity markets.

Through this period, those with a disciplined rebalance strategy and a plan to opportunistically harvest tax losses have come out ahead.

It’s important to point out we still have a ton of negative economic news left to digest. It remains to be seen if these startling numbers are fully priced into equity markets. More sharp pullbacks (followed by rebounds) are likely.

In addition, our economic recovery is looking less like a sharp snapback and more like a gradual, careful transition to normalcy, gaining momentum through the course of 2020. Further market optimism should be tempered by the risk of a new wave of cases in the fall.

#2: The End of the Beginning

It was Winston Churchill who said in 1942, “Now this is not the end. It is not even the beginning of the end. But it is, perhaps, the end of the beginning.”

There’s proof that we are turning the corner in parts of the world, and the US isn’t far behind. But until we get a vaccine or confirmation of a successful treatment for COVID-19, it’s likely we’re just entering “the end of the beginning” phase of the pandemic – not the end. Over the next few months, it’s unclear how comfortable we’ll feel eating out, visiting a movie theater, or flying in an airplane.

For a glimpse into the potential future here in the US, we can use South Korea as a parallel. From Bloomberg this weekend, “Cafes bustled with customers, parks teemed with sunbathers, and the first Apple store to reopen outside China had lines snaking out the door as many South Koreans -- almost all wearing masks -- emerged from months of self-isolation.”

People are out and about in South Korea, a country that serves as the model for testing and tracing the coronavirus outbreak among its borders. It remains to be seen when the US will get to this level of preparedness.

In parts of Europe, plans are in motion for citizens to return to a semblance of regular life as well.

Germany is slated to end its lockdown today!

With proper social distancing protocols, small retail shops such as bike shops and bookstores will be allowed to reopen, as will large car dealerships. Schools are targeted to open May 4th. There’s a recognition that this process will be a slow, with a careful tiptoe toward normalcy.

Here in the US, West Coast states including California, Oregon, and Washington, announced a partnership, working together to reopen the economy. California Governor Gavin Newsom announced a six-step plan that includes:

No firm timetable has been given in the US, but clear progress is being made.

There was an encouraging report last Thursday evening from STAT News and other media outlets, who pointed to anecdotal evidence from an ongoing Phase 3 trial of Remdesivir at a University of Chicago hospital. According to CNBC reporting, “Patients showing severe Covid-19 symptoms who were given the drug saw rapid recoveries in fever and respiratory symptoms, with nearly all patients discharged in less than one week.”

Both Gilead, the maker of Remdesivir, and the University of Chicago Medicine say that any results are not yet scientifically sound or statistically proven. However, this follows a New England Journal of Medicine analysis “showing that two thirds of a small group of severely ill patients saw their condition improve after taking the drug. These patients were given Remdesivir as part of a compassionate use program which allows doctors to provide patients with unauthorized treatments when no other treatment is available.”

We’ll know more by the end of the month when Gilead releases the official results of their Phase 3 trials on patients with severe cases. Results from a second trial on patients with more moderate symptoms will be released in May. I can’t think of a more anticipated announcement.

However, ‘cautious optimism’ should be our anthem here, and it is likely that any positive news from these trials is already baked into the market, while negative news will likely mean a significant let down.

Other therapies are being tested, including an oral anti-viral that can be prescribed early at onset of disease.

For passengers from the Costa Deliziosa, they’ll soon enter this new reality, which the rest of us now know all-too-well. They’ll likely be impressed by progress being made to combat the disease along with the resilience of citizens who elect to stay home in defense of their fellow human.

We’re all in this together, and although we’re going through challenging times, it’s been a pleasure to speak with so many of you.

If someone you care about simply needs a financial professional to speak with, do not hesitate to contact us. Sharing our knowledge and experience has brought us a tremendous amount of comfort that we’re contributing and helping others through these hard times.