It’s hard to believe that another four years have gone by and we find ourselves at the beginning of an election year. Not long from now, voters will cut through the rhetoric and rancor to cast their votes for President of the United States. Passions are running high on both sides of a loud and angry political debate which will only grow more intense as we close in on November.

Of course, it would be natural for investors to think that if their favorite candidate doesn’t win, the economy will crash and the whole country will fall apart.

Those fears may be tainted by red or blue bias, but will the presidential winner really make a significant difference on Wall Street, yet alone Main Street?

The truth is that it hasn’t mattered much to the US stock market throughout history whether a Republican or Democrat has controlled the White House. Stocks and the US economy have often flourished under both administrations. 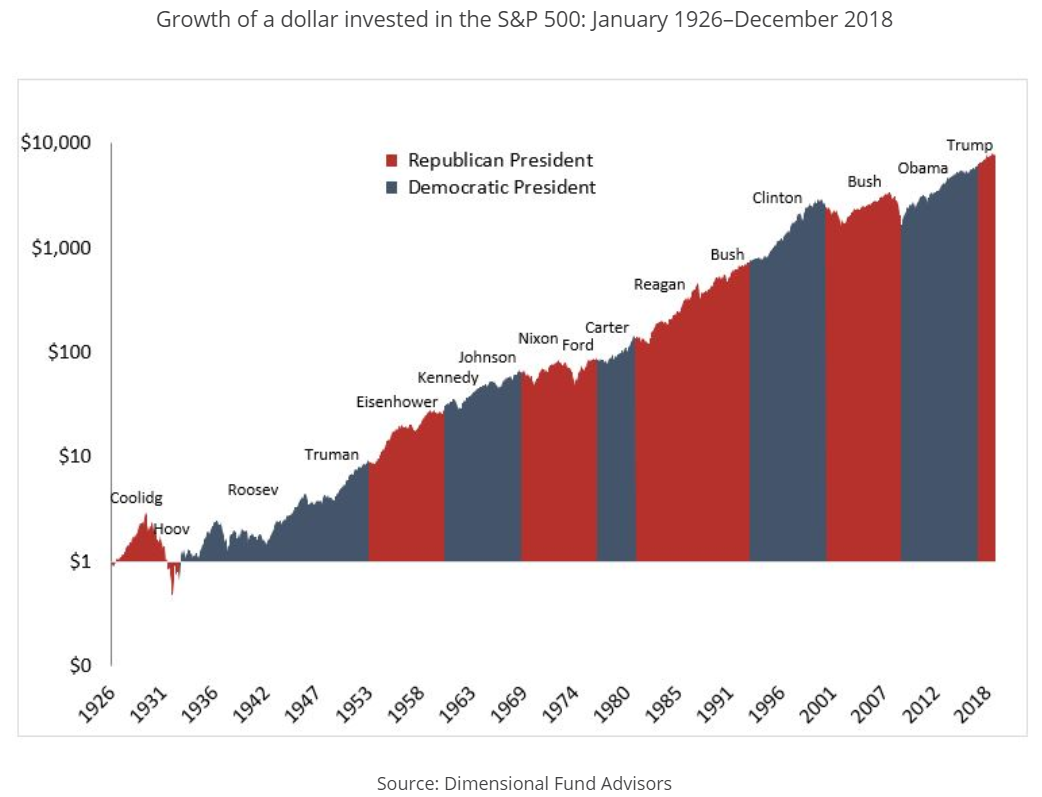 What about party control of Congress?

As you can see from the chart below, the economy and US stock market have grown under each of the three types of Party Control – Republican, Democrat, and Mixed. In fact, there have been recessions and expansions under the three different regimes, so the data doesn’t support a conclusive pattern by which an investor can attempt to profit or avoid loss through short-term trading. 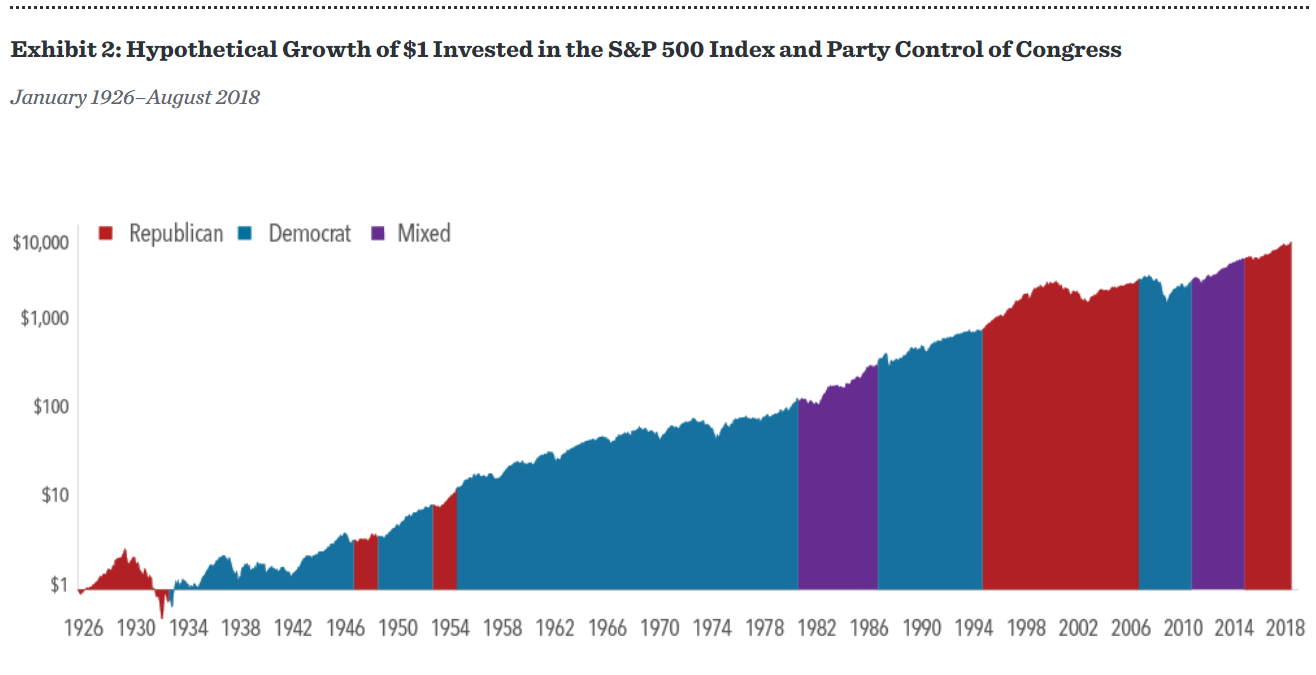 That being said, I would expect an increase in stock market volatility during a presidential election year. As projections and polls shift back and forth, so will future expectations of the next President’s economic impact. There’s a saying in investing, “the market doesn’t like uncertainty.” (Which is kind of funny since we go through this EVERY…FOUR…YEARS.)

Even when we factor in that increased uncertainty, US stocks have performed well during election years going all the way back to 1928. In that timeframe, only four election years yielded negative returns, and the average annual election year return was not significantly different than the average return for all years as you can see in the data below. 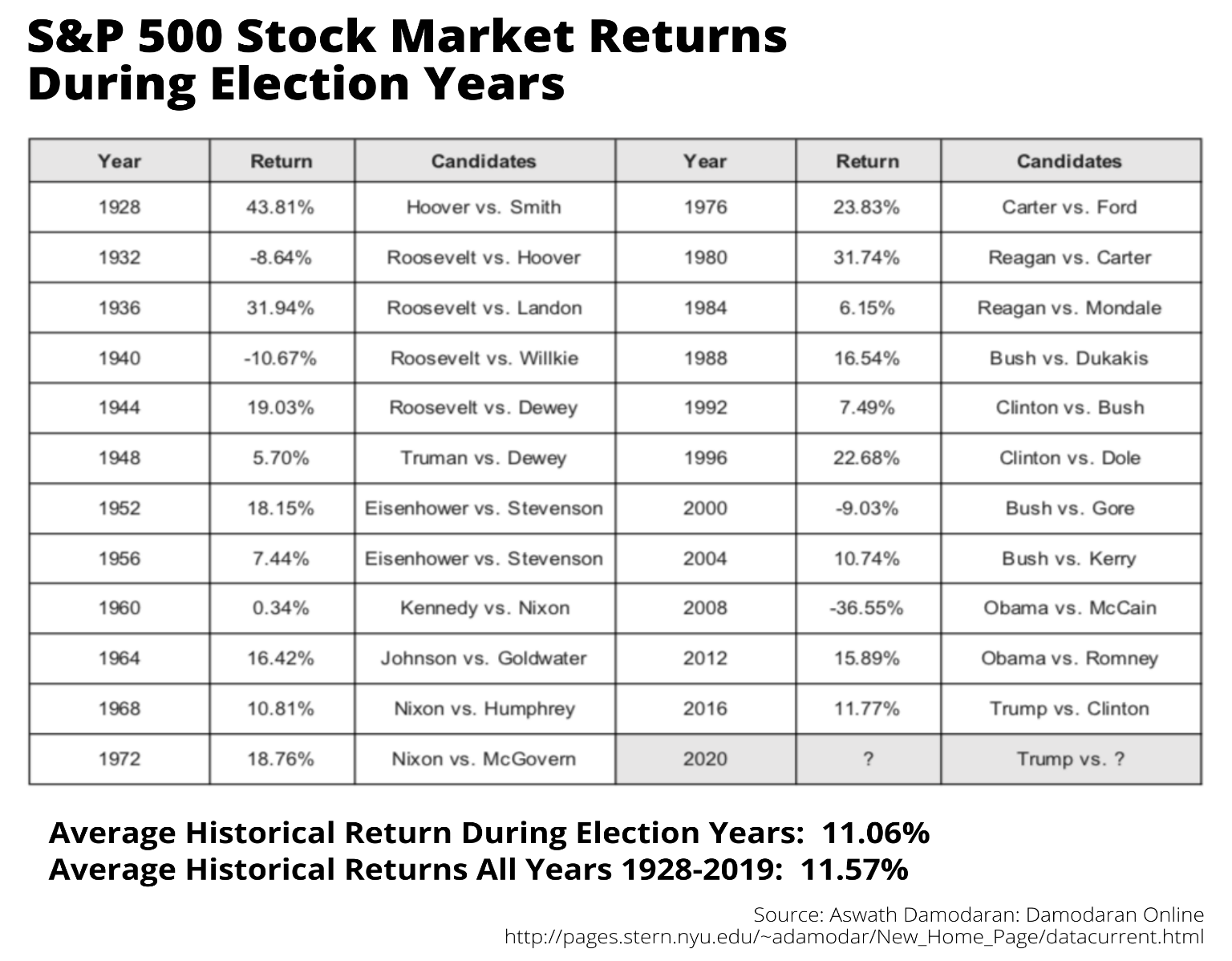 Even with a mountain of historical evidence, it’s easy to believe this time is different. While there might be an urge on election night to sell all your investments and move to Canada, the reality is that this country has survived and thrived under much more extreme conditions .

If I can leave you with one thing, remember this: On election night when the final votes are tallied, one citizen slams the table in disgust, while another cheers with delight. Regardless, they both get up the next day and get to work on making a better life for themselves and their families. This is what makes America great and why forward progress continues.

Regardless of the outcome on election night, trust that life and markets will go on.

The Standard & Poor’s 500® (S&P 500) is an unmanaged group of securities and considered to be representative of the U.S. stock market in general. An investment cannot be made directly in an index. The data assumes reinvestment of all income and does not account for taxes or transaction costs.