Investing is difficult; there’s always something new to worry about.

With the pandemic not quite in the rear-view mirror, attention is already shifting to fresh concerns – rising interest rates and inflation.

What we’re all really fearful of is a repeat of the stratospheric rates and hyperinflation that we experienced in the 1970s and early 1980s.

Rapidly rising interest rates and inflation can stifle an economy. During the 1970s, a conflict in the Middle East led to a meteoric spike in oil prices, which then led to a sharp increase in manufacturing, agriculture, and transportation costs. In turn, workers demanded higher wages to compensate for rising costs. This created a self-perpetuating cycle that spun out of control. 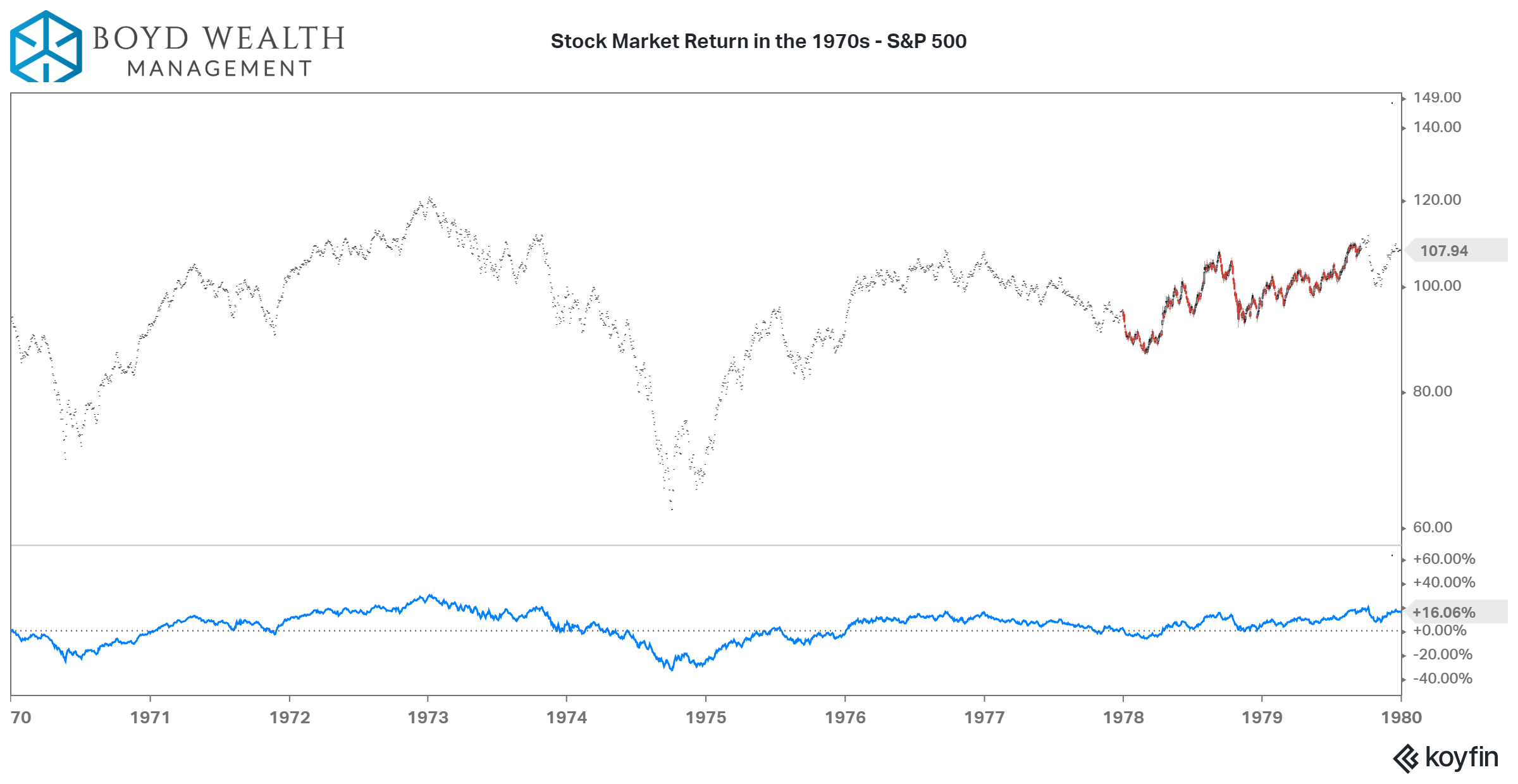 So, are we currently on track for history to repeat itself?

After a year in which the economy was artificially and intentionally stalled during COVID-19 lockdowns, thus far the theme of 2021 has been about robust recovery.

Expectations for how fast the economy can return to normal accelerated toward the end of Q1 on the back of two developments:

These developments have catapulted US GDP growth expectations for both Q2 and Q3 to 7.0% and 6.9%, respectively. 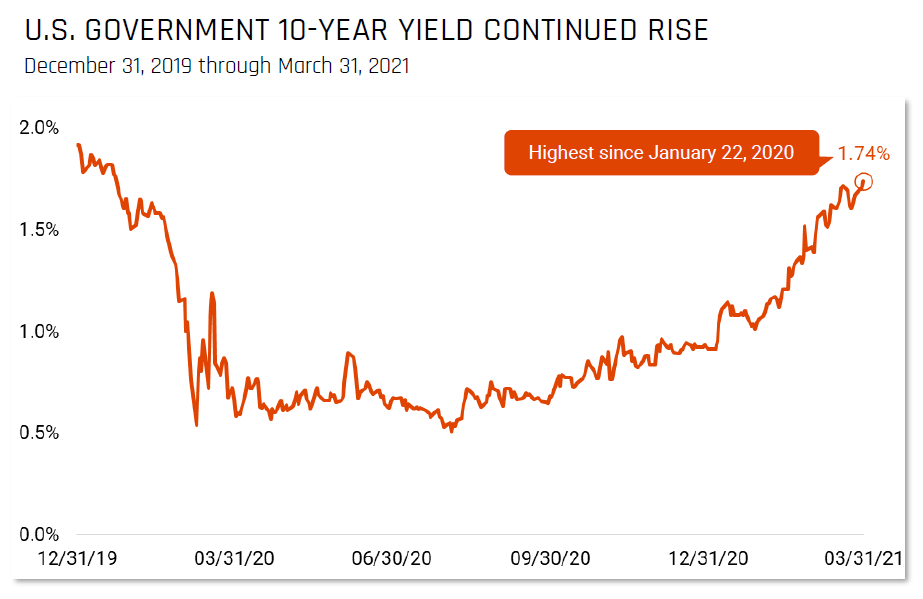 This rapid ascent - more than 1% in less than 12 months - was not unexpected as we transition into economic recovery. Closing out April, rates have stabilized at around 1.6% even on the heels of some impressive economic data this month – retail sales, Core CPI, housing starts, and unemployment.

Nevertheless, market doom-and-gloomers have come out in full force.

However, history has demonstrated that stocks generally perform well when rates rise. 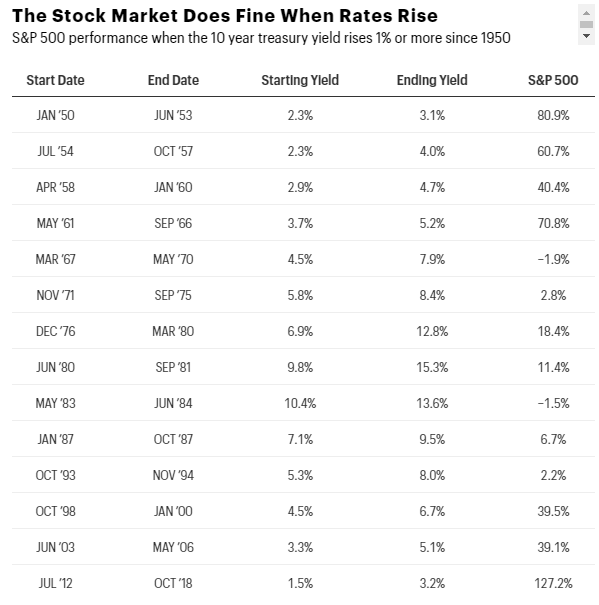 Is there a rate for the 10-Year that could actually be detrimental to stocks?

According to an analysis by JP Morgan Asset Management, since 2009, stocks and rates move together until the 10-Year yield rose to 3.6%. At that point, they began moving in opposite directions. 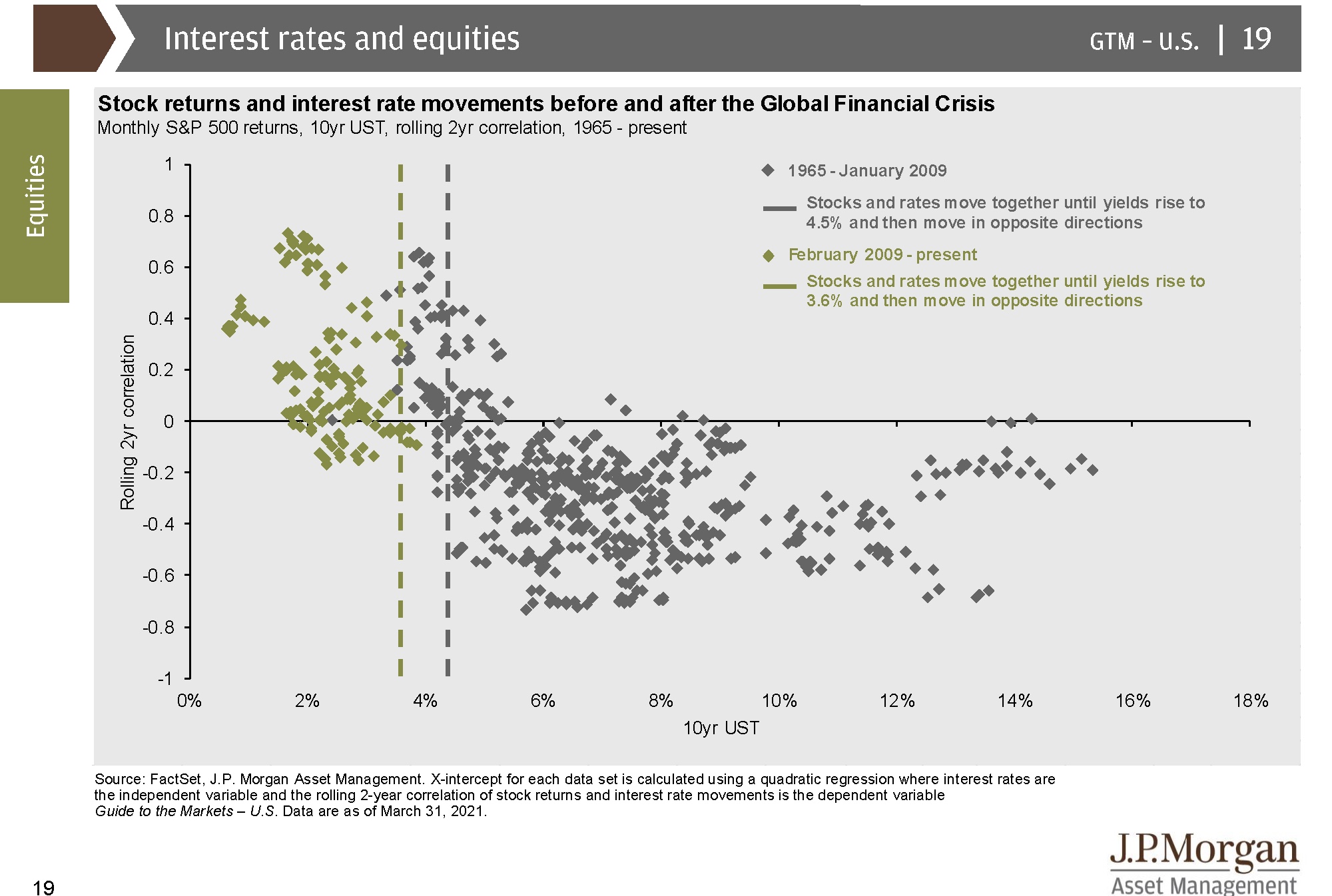 Of course, there’s no definitive rule for this. But at a certain rate, bonds do become more attractive than stocks to a segment of investors, specifically those that have been dragged into investing in equities due to persistently low yields in cash and bonds.

Year-to-date through April 19th, the Bloomberg Barclays Global Aggregate Bond Index is down 3.25%. The negative returns in the short-term are, at least partially, offset by an increase in forward expected returns in the same bonds. In addition, bond investors will see in an increase in income from newly purchased bonds.

Retirees, in particular, have been punished by low rates for more than a decade now. 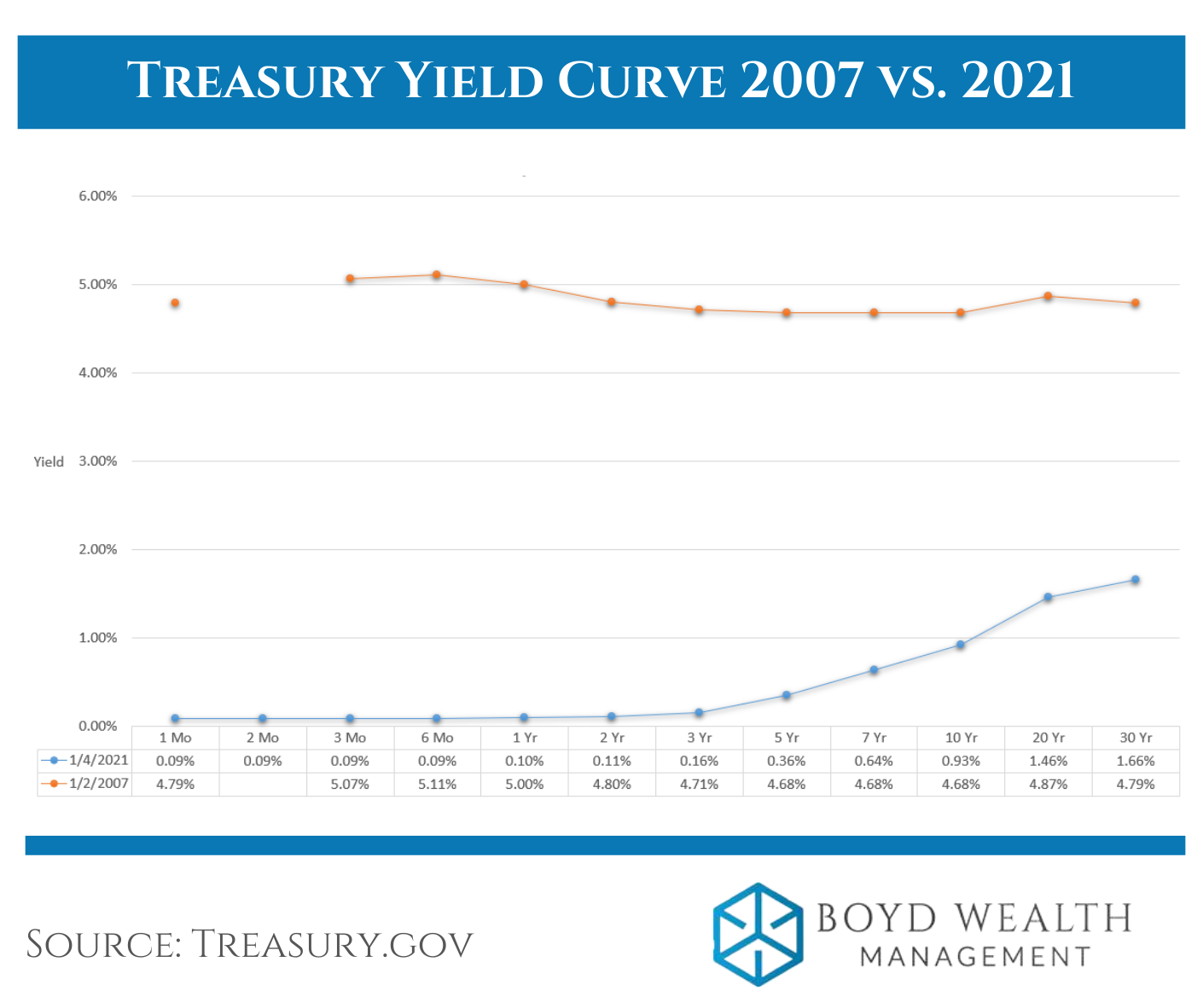 In 2007, interest rates across the yield curve were around 5%. Investors in short-term treasuries could earn 5% per year with very little risk. Today, it’s less than 0.10%!

A rise in rates is welcome news for income-starved bond holders.

Using the Fed’s preferred inflation measure, Core CPI (which excludes volatile food and energy prices), the average rate of inflation over the last 10 years has been about 2%. The most recent read on inflation, released on April 13th, showed the Core CPI rate rose 1.6% from one year ago. Most of the increase in the annual number came from the “base effect”, which means we’re measuring the percentage change from 12 months ago when the massive economic shutdown began.

If you include energy and food, the increase was higher at 2.5%. 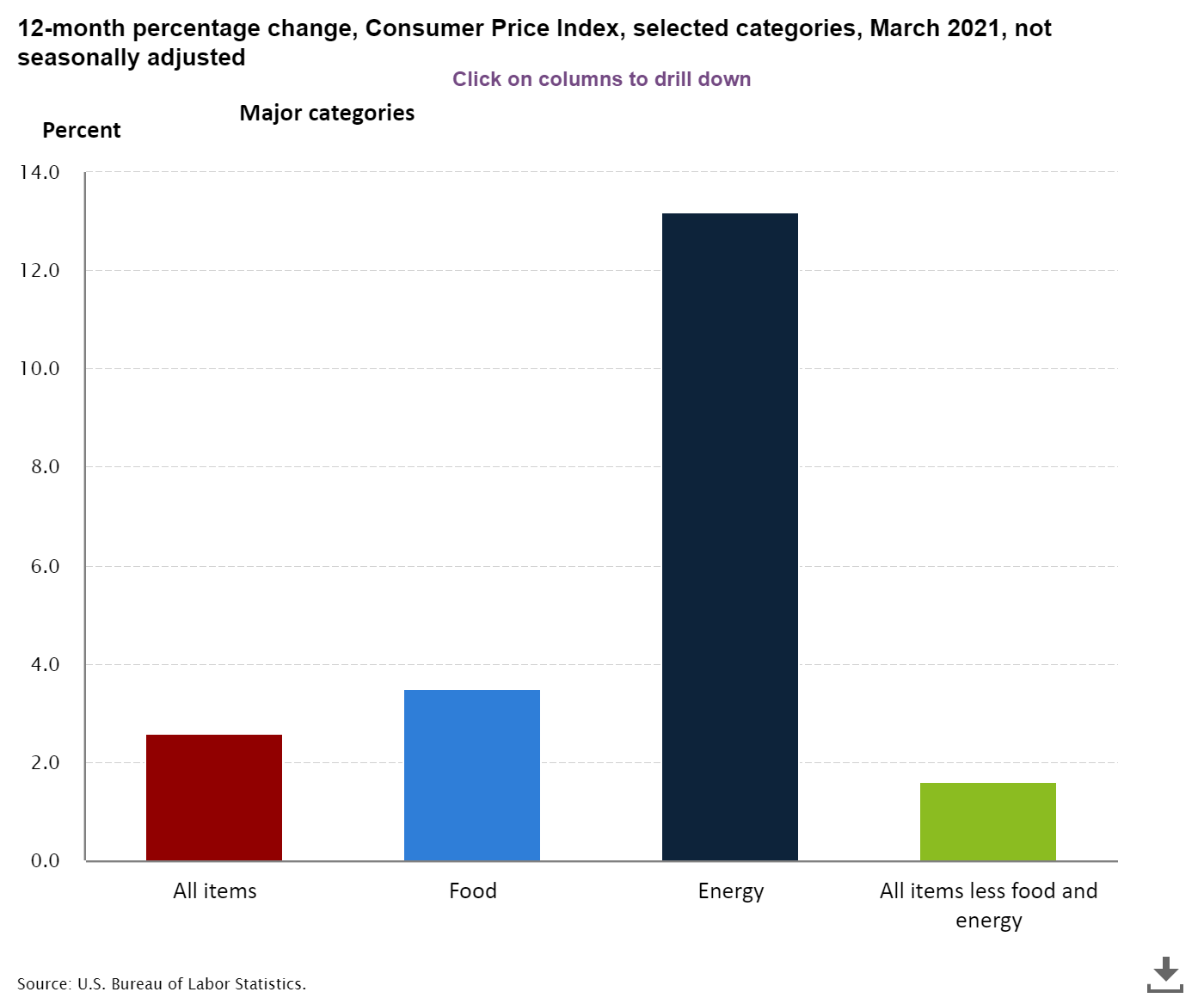 While lumber prices are getting most of the headlines, 54% of the increase in inflation was attributed to gasoline prices, which is likely a transitory situation. The rebound in oil consumption and gas prices was not unexpected. Demand had so crumbled one year ago that the world was awash in oil. The commodity traded for negative $40 per barrel. That is, someone would pay you $40 to take their barrel of oil off their hands because they no longer had a place to store it!

Even though gas prices were the main cause of inflation in the 1970s, the US has since become significantly more energy independent, there’s relative peace in the Middle East, and there’s a push (even legislation in the US) to transition away from fossil fuels.

Chairman Jerome Powell appeared on 60 Minutes April 12th  and had this to say:

“Well, what we said was we want to see inflation move up to 2%. And we mean that on a sustainable basis. We don't mean just tap the base once. But then we'd also like to see it on track to move moderately above 2% for some time. And the reason for that is we want inflation to average 2% over time. And when we get that, that's when we'll raise interest rates.”

Powell went on to say that the inflation picture and the economy has evolved since the 1980s. Technology continues to create efficiency and a more global economy has kept a lid on inflation.

We will continue to monitor both rising rates and inflation, updating your portfolio holdings as needed.

It’s important to keep in mind that higher rates will ultimately benefit bond investors, and controlled inflation is a welcome symptom of growth.

It would be wise to expect market volatility this year as investors digest wild growth data, high equity valuations, and potential infrastructure spending and tax reform – just to name a few.

For now, the Fed seems fully in control. “I'm in a position to guarantee that the Fed will do everything we can to support the economy for as long as it takes to complete the recovery,” according to Chairman Powell.

I believe it’s possible that the lessons learned from past policy mistakes can guide us to achieve both sustainable growth and moderate inflation post-pandemic. Based on current data, we appear to be nowhere near a breaking point, which is encouraging.

Please reach out to us if you’d like to discuss this in the context of your financial and investment plan.