Like Yankee Hall-of-Famer Yogi Berra once said, “It’s déjà vu all over again.”

Inflation, interest rates, consumer sentiment, and the invasion of Ukraine continue to impact markets and the economy.

Unsurprisingly, inflation continued to push higher in March, with prices rising 8.5% over the prior year1, coming in close to forecasts. 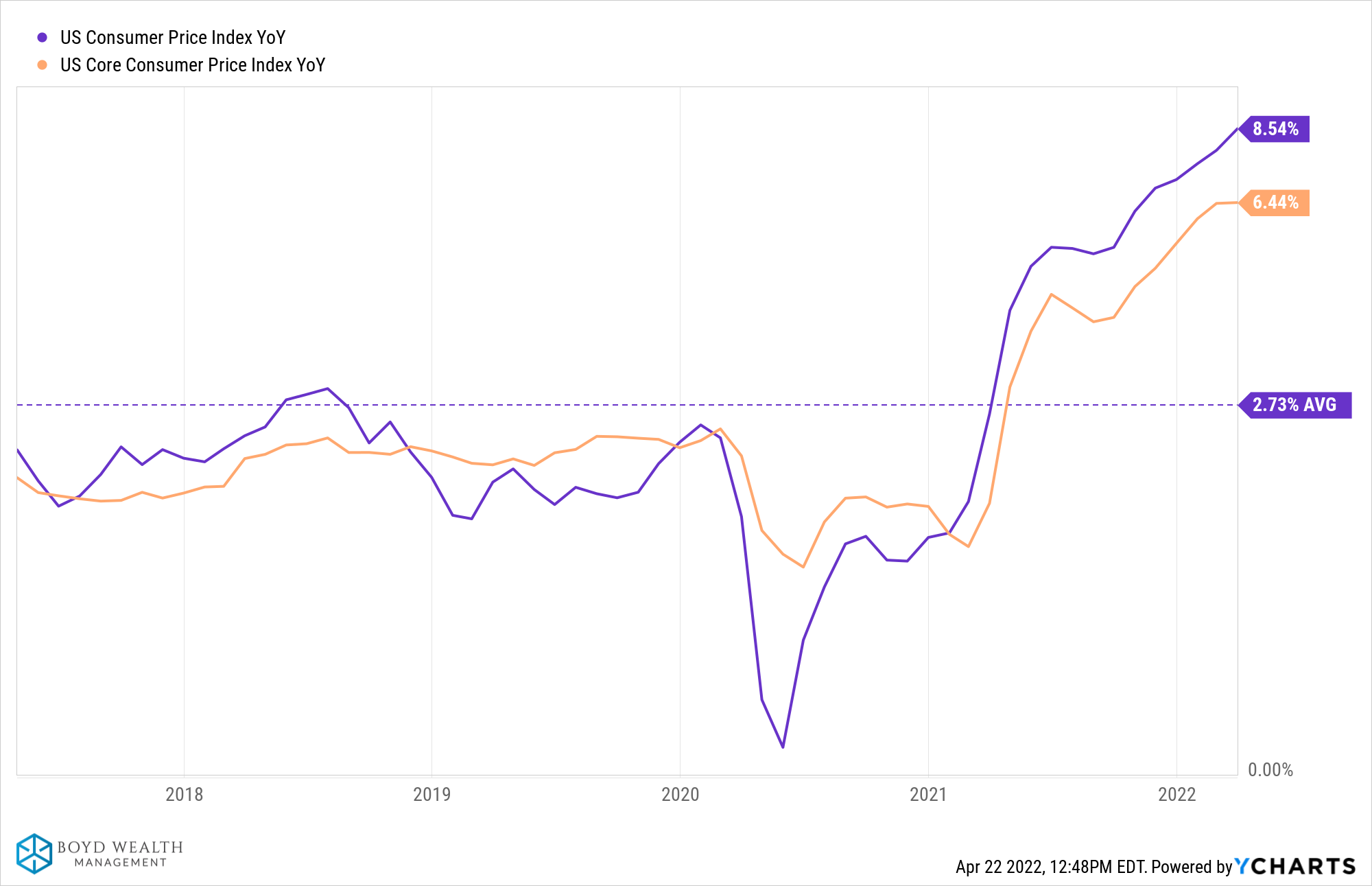 The Fed is expected to consider a larger rate increase in response, hoping to bring inflation under control more quickly. However, anticipation of a half-point increase has created substantial volatility in equity markets so far this month. Compared to February, prices for energy and services rose in March while the prices for goods fell for the first time in a year.

Is this peak inflation? Only time will tell.

Overall, interest rates continue to rise, not only putting pressure on general bond prices but sending mortgage rates skyrocketing. According to Bankrate, the average rate on a 30-year fixed-rate mortgage surpassed 5% in early April, the first time since 2011. The pace at which mortgage rates have risen is quite astonishing. One year ago, the average 30-year mortgage stood at 2.97%.2

Do we believe this will cause a housing bubble like in 2008?

But it could help cool rampant buyer demand and ease inflation in real estate, raw materials, and related home goods.

Turning from Main Street back to Wall Street, rising rates are not good for bond prices in the short term as you can see in the chart below. Across the board, bond returns are negative year-to-date. But remember that in the long-term, rising rates are good for investors as the income derived from bonds goes up.

Consumer sentiment (which has been in the doldrums lately) jumped to a three-month high in April, according to the University of Michigan's Consumer Sentiment Index. Prevailing attitudes toward our financial future increased the most since 2006, supported by higher wages and the belief that longer-term price increases will fall from their elevated levels. But despite this bit of good news, the trend in consumer sentiment is still overwhelmingly negative.

Prior to the jump in sentiment, overall retail sales in March rose 0.5%3. Surging gas prices pushed up gas station sales, helping mask falling sales in vehicles and e-commerce, two of the largest spending categories in the Census Bureau’s report. Despite average U.S. gas prices slowly receding from their recent peak in mid-March4, energy prices and increasing costs elsewhere in the economy may be diminishing consumer appetite to continue spending on goods and services.

At the risk of being repetitive (all over again, as Yogi Berra would say), inflation continues to be the primary story, followed by the war in Ukraine. As the world settles in for a protracted period of geopolitical saber-rattling, the Fed has the task of reducing U.S. demand for goods and tempering inflation. The upcoming Fed meeting in May will provide deep insight into just how worried they are.

Until then, expect elevated market volatility tied to the latest headline or data release of the day.

We’ll continue to monitor the data and make any necessary adjustments to your portfolios.