In 1997 the internet was still in its infancy, and we didn’t even have iPhones.

It was also the year we lost Princess Dianna and Notorious BIG. Top songs included Mark Morrison’s “Return of the Mack,” “Semi-Charmed Life” by Third Eye Blind, and “Quit Playing Games (With My Heart)” by the Backstreet Boys.

(More notoriously, it was in 1997 that Mike Tyson bit Evander Holyfield’s ear!)

1997 was also the year I began my career in financial services.

It’s been a wild ride in the 25 years since, but one for which I am very grateful. 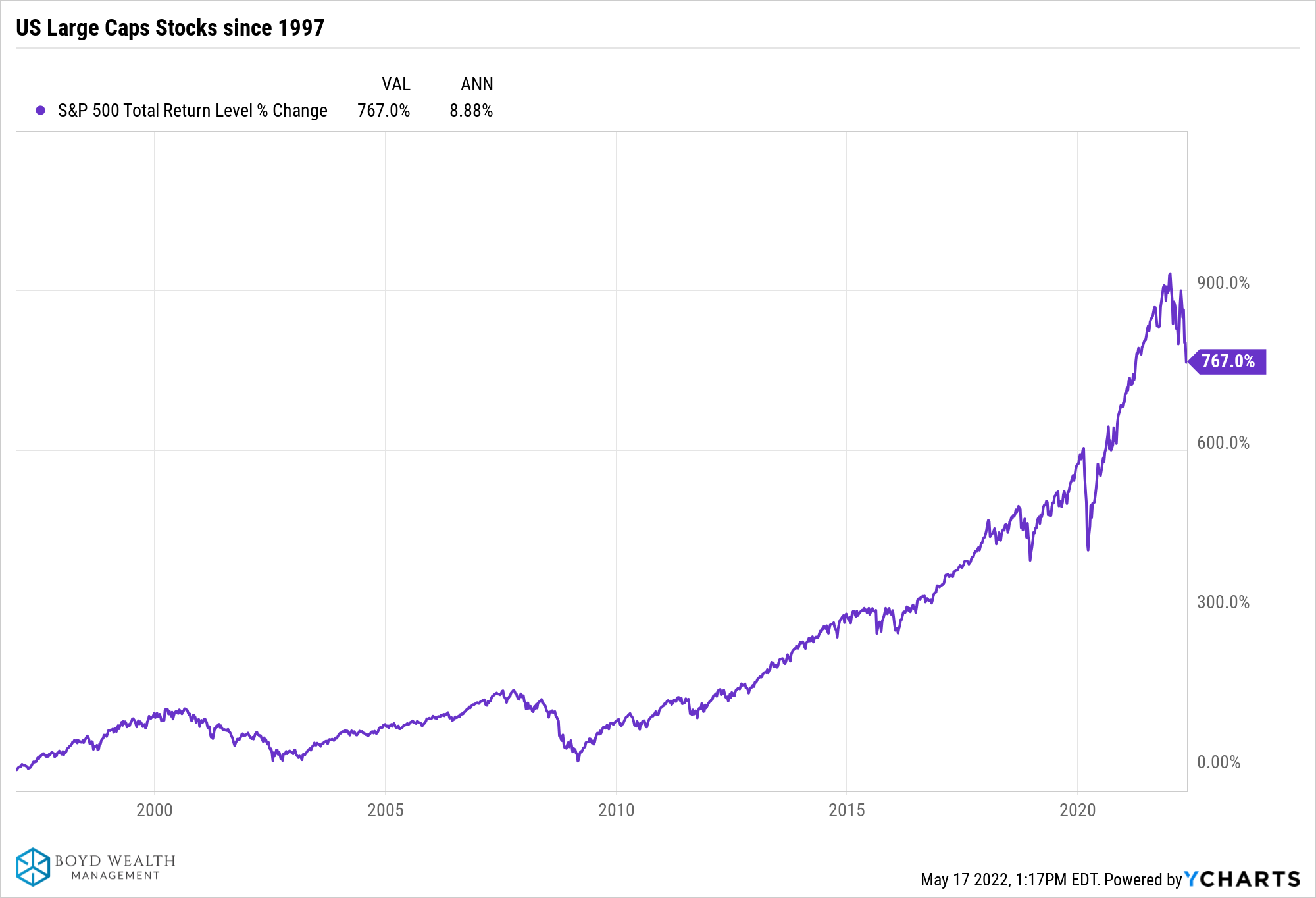 I’m lucky to have started my career at that point in history. Markets performed well throughout the 1990s, and I had a very positive experience personally since I started investing at the age of 16.

During that era, technology as we know it was just starting to take off. The internet was building its foundation. Excitement about the future was bringing new investment to soon-to-be Goliaths such as Google and Amazon.

I feel equally fortunate to have witnessed and managed client assets through three large economic and market downturns since then. As Franklin Roosevelt said, “a smooth sea never made a skilled sailor.”

Overvalued and over-speculated tech stocks crumbled (down 78%) in the tech bust between 2000 and 20021. Amid a nascent recovery, we were then attacked on 9/11, extending that recession further.

Then in 2008-2009, over-leveraged homeowners stopped paying their Stated Income and NINJA (No Income, No Job, No Assets) loans. The banks that had lent this easy money found themselves in deep financial trouble. Shockwaves from the ensuing mortgage meltdown and housing market collapse almost brought down the entire financial system. In short order, the US stock market dropped 57%.

And no trip down financial memory lane could be complete without managing investments through a pandemic! In the spring of 2020, much of the world was locked in their homes without the ability to spend their money. Economies came to a standstill. The US market dropped about 34% this time…in just one month.

There are no classes in college on how to manage emotions (yours or others) during a volatile economic climate. But I have learned a few tricks over the last 25 years to make it through a challenging market.

What Really Works in Investing

In any given year, it’s normal for the US stock market to be down at some point. The average annual drawdown since 1997 has been 15%. In 20 of those 25 years since 1997, stocks ended the year with a positive return. The average yearly return has been 11%.

Downturns and recoveries are normal. 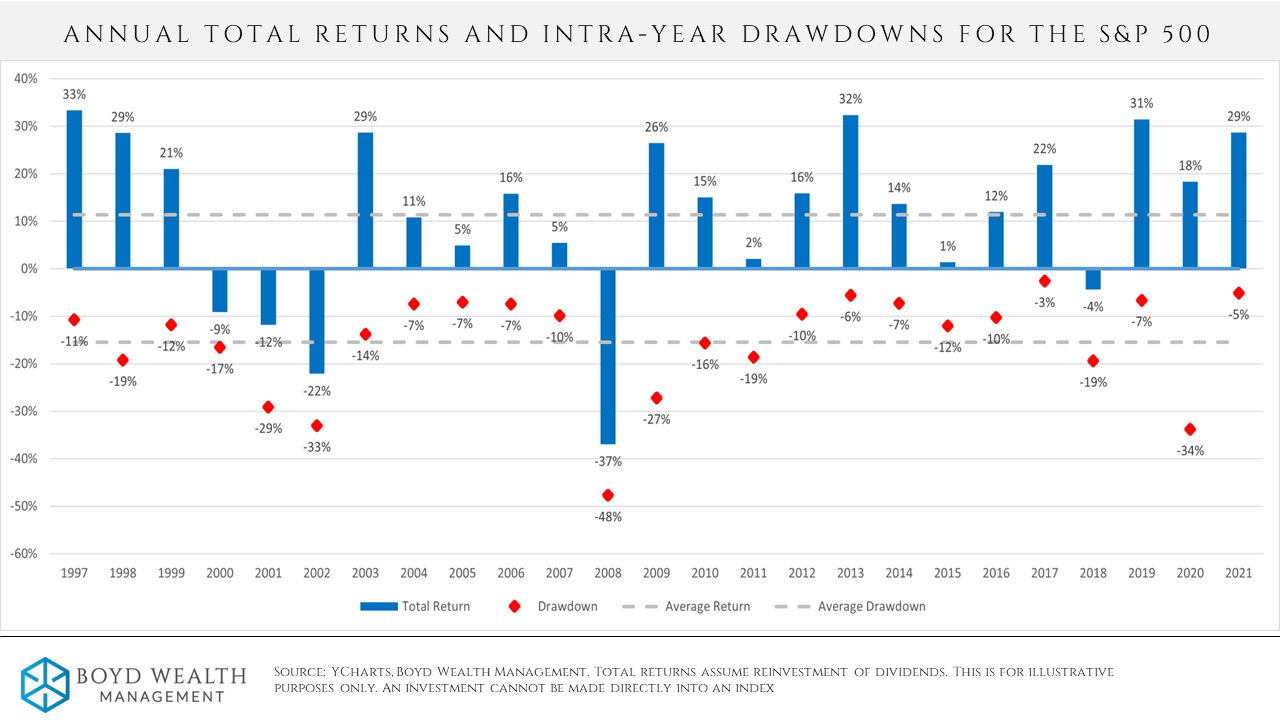 With inflation running amuck and the Fed behind the curve, bonds are off 10% so far this year.

But it’s normal for bonds to experience intra-year declines as well. 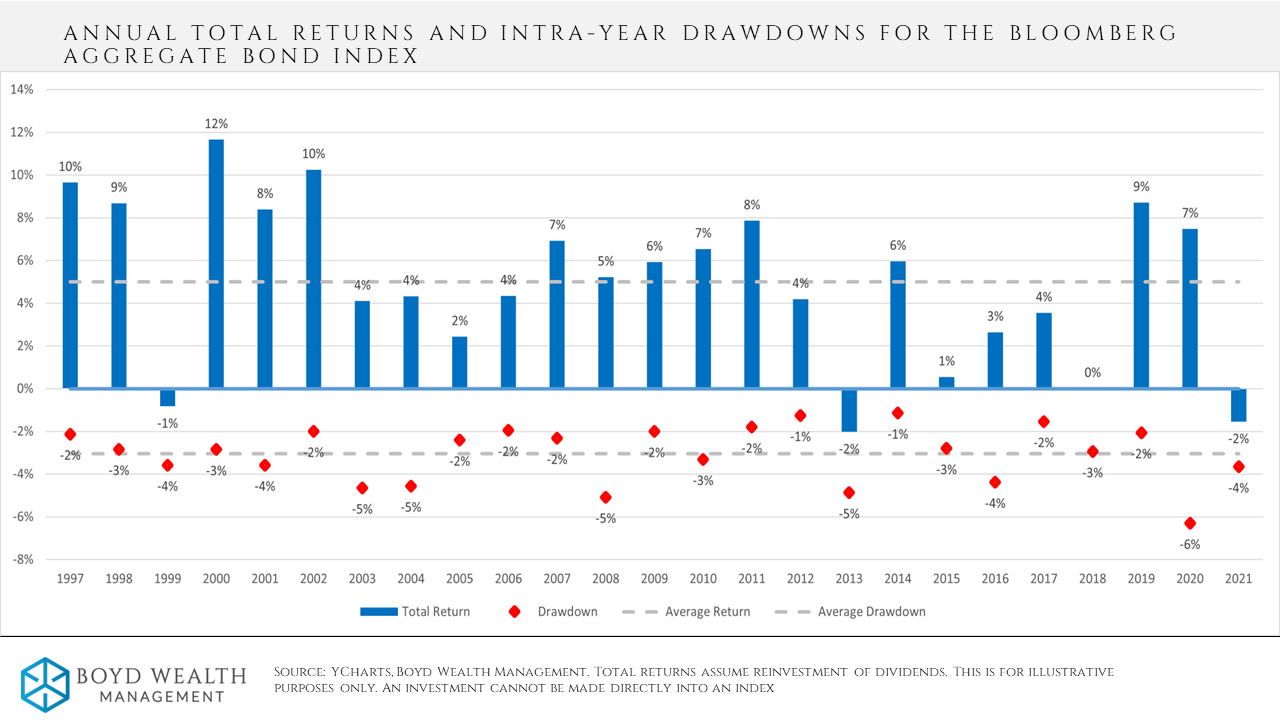 Bonds have exhibited lower volatility and lower - but more steady - returns than stocks, which is why they’re considered a fantastic portfolio diversifier. The average intra-year drawdown for the US Aggregate Bond index has been 3%, while the average annual return has been 5% per year since 1997.

The bond index has only finished the year with negative returns in 3 out of 25 years.

History shows us that our current environment with asset prices retreating is not only normal, but very likely temporary.

Did you know that going back to the start of 1997, the daily return for the S&P 500 was positive only 54% of the time? That means the market ended down on any given day almost half of the time - over 6,379 observations.

It delivered an 8% average return - and yet the market was up only slightly more than half of all days! 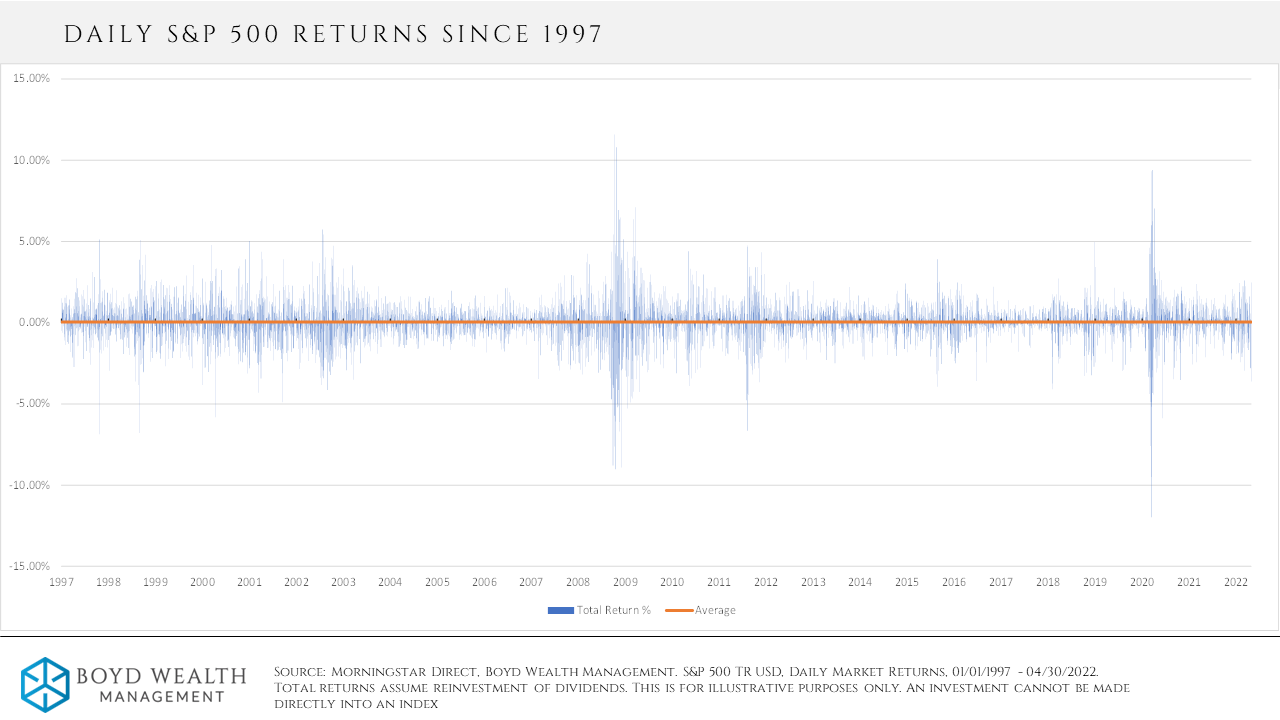 As you can see, the daily data is very noisy.

So, what if we take a step back and look at rolling 20-year periods?

In total, there have been 65 rolling 20-year periods, and returns have been positive 100% of the time! 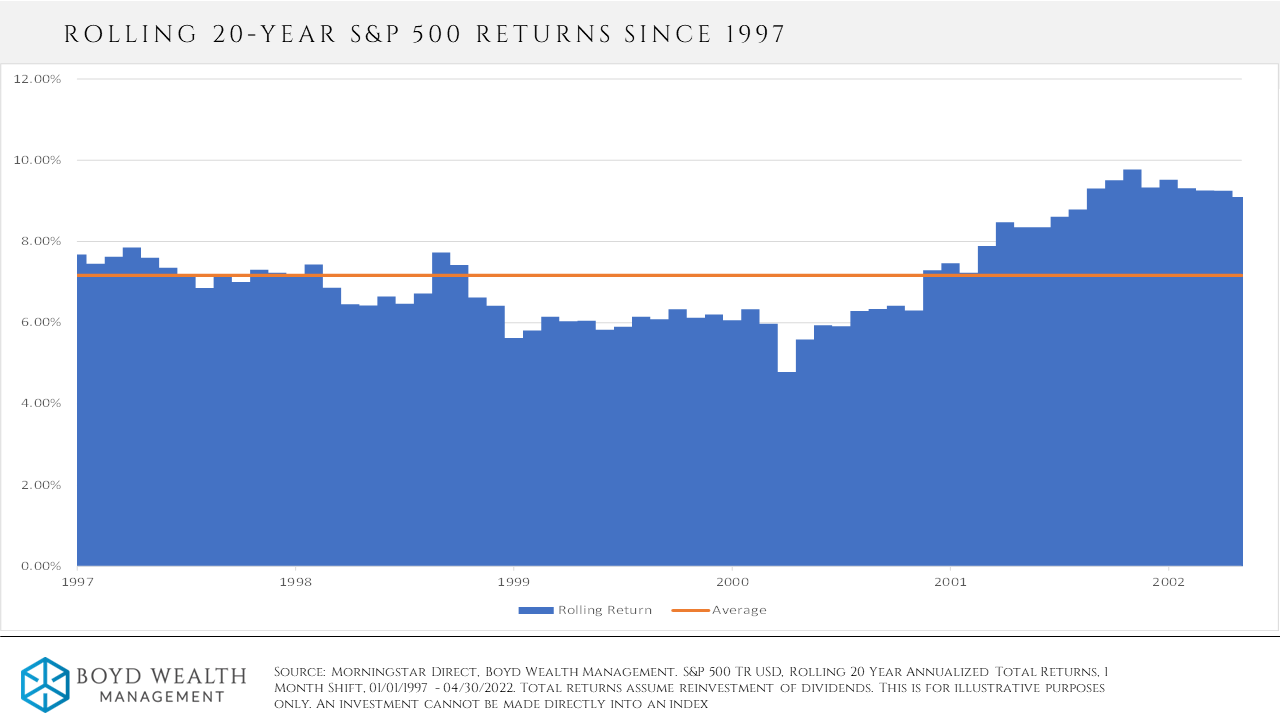 Extend your time horizon and your odds of achieving positive returns increase significantly.

This one is under-rated. The mistake (or mistakes) I’m talking about usually boil down to two things:

1.  Buying too much of a highly speculative investment only to get wiped out.

2.  Selling out of a perfectly diversified asset allocation portfolio at the bottom of a normal market downturn.

From Ponzi schemes to cryptos to meme stocks, if it looks like a duck and quacks like a duck, it’s probably a duck. The allure of easy riches and astronomic returns is tough to pass up for many. But no, there's no such thing as a free lunch. One of the largest cryptos, Terra/Luna, imploded last week, wiping out $40 billion of investor cash.

Over a year ago, we cautioned about the tiny bubbles that were forming in crypto, SPACs, and NFTs. As important as it is to make the right investments, it’s just as important to avoid the wrong ones – or at least invest cautiously.

The same thing applies to tech stocks with no revenue in 1999 and homes with no equity in 2007.

Now, if you have a disciplined, data-driven, evidence-based investment strategy then you expect short-term downturns. And recoveries.

Easy to say, I know. That's where managing our emotions comes back into play.

Maintaining a steady hand during turbulent markets is not easy. It feels terrible to stick with (or add to) a portfolio that’s losing value. The news is usually bad and getting worse. Your neighbor went to cash two weeks ago and looks like a genius. It doesn’t feel good to just sit there and lose money.

But you know what’s worse? Getting out and missing a decade-long rally. And no, you won’t just sit out for a little bit and then get back in when it feels good. In 25 years, I’ve never seen anyone do this successfully.

The thing about down markets is that they all feel terrible. But the key to success is having a plan.

It helps to arm yourself with a bit of history, keep the right perspective, and avoid making a big mistake (or two). You’ll get through this and come out better on the other side.

Please reach out if you’d like to discuss your plan or portfolio in more detail.