There’s a fair amount of recession chatter going around right now. Everyone wants to know when the next downturn is coming. It’s understandable given that we’ve now experienced the longest, albeit weakest, expansion in modern history. 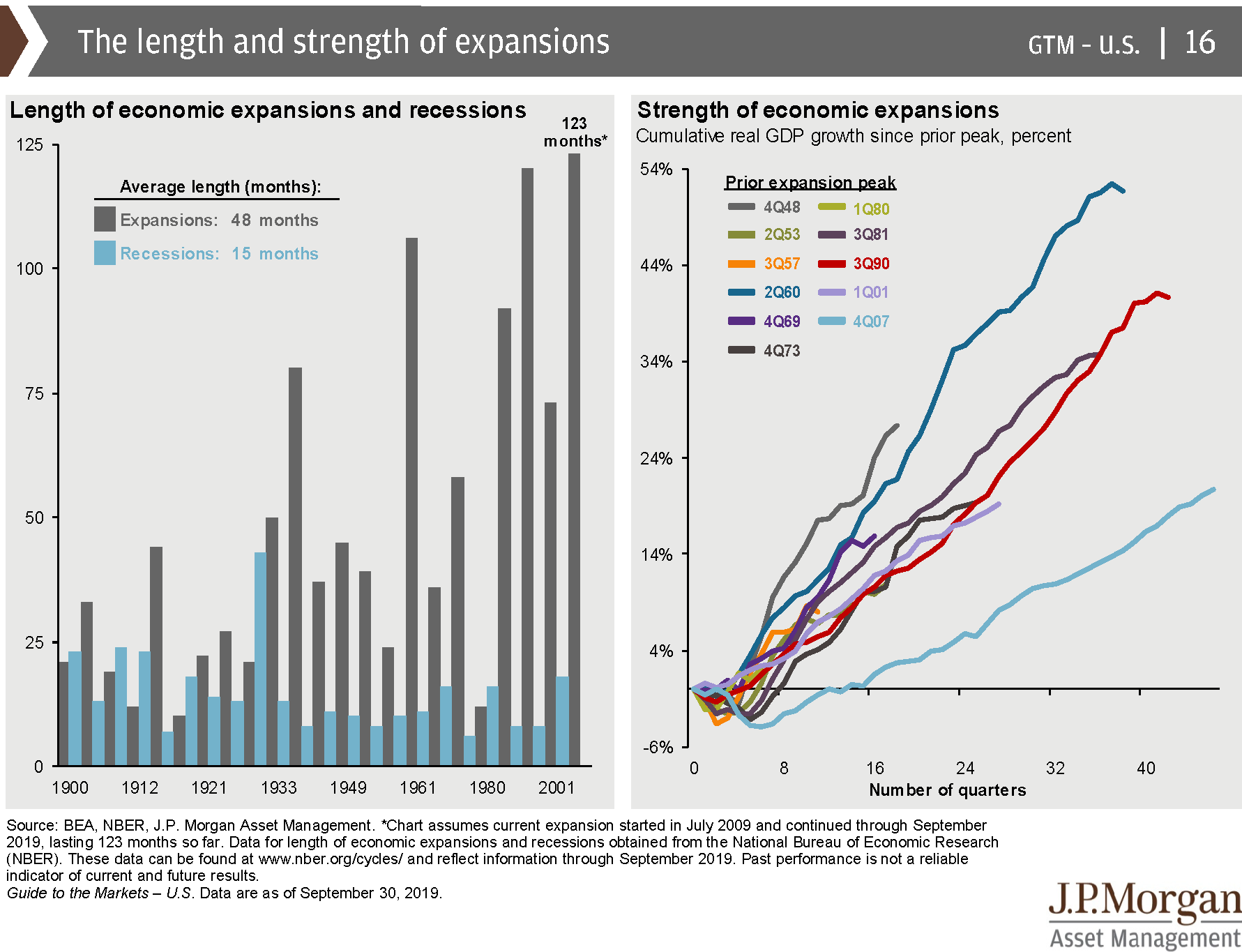 Worry about impeding recession has been a standard feature during this economic cycle. The scars from our two most recent downturns during the years 2000-2001 and 2007-2009 are still fresh. It seems everyone’s baseline expectation of a recession is a multi-year economic meltdown coupled with a prolonged deep drop in equity markets. Perhaps it’s this expectation that the other shoe could drop any minute that's  kept the party going for so long.

As you can see below, those two recessions were more the exception than the rule. 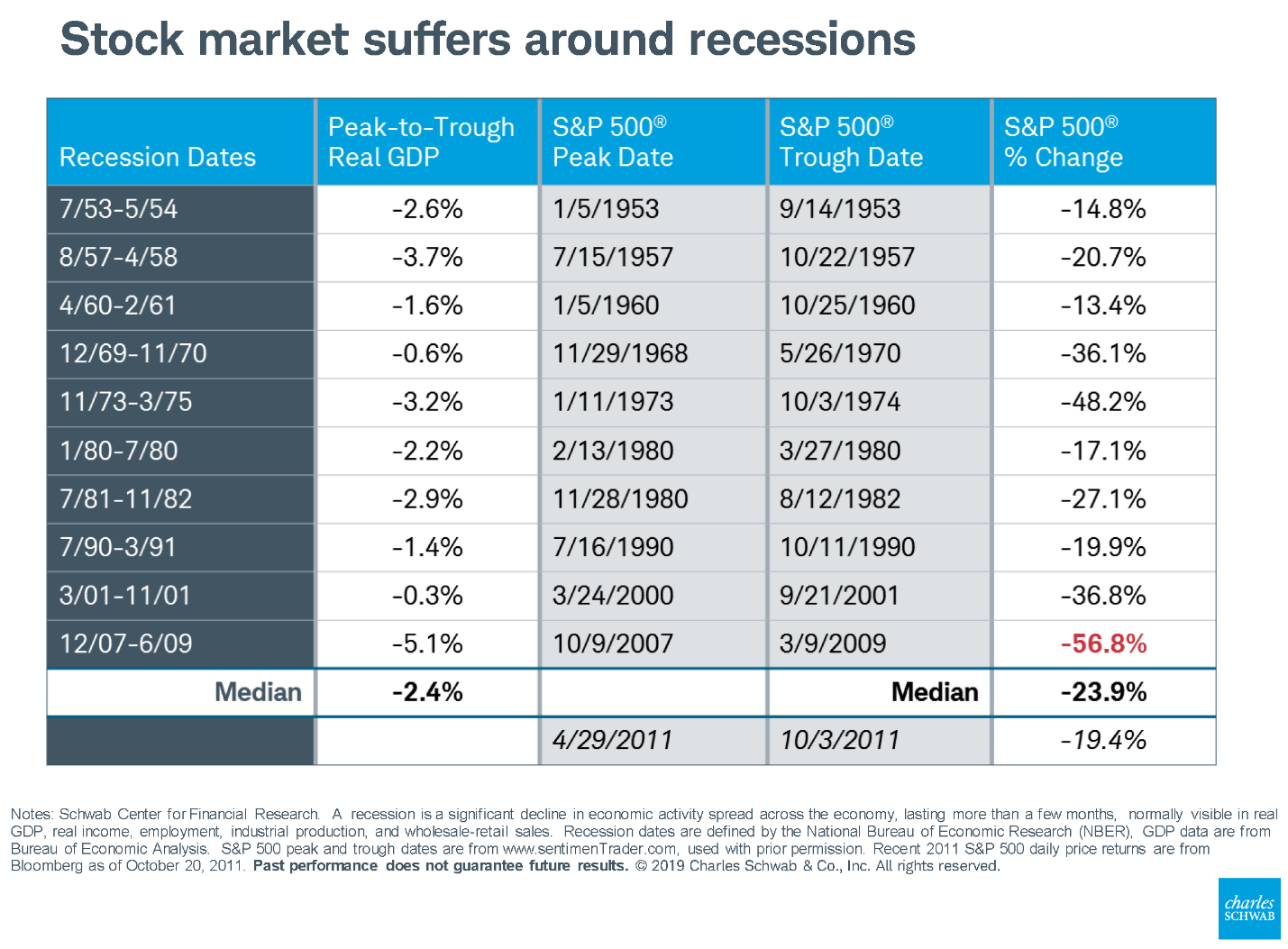 Recessions don’t occur in fixed and predictable time frames either. There is zero predictive power provided by the length of an expansion. Former Fed Chair Janet Yellen said, “I think it’s a myth that expansions die of old age.” Australia, for example, hasn’t experienced a recession since 1991 - almost 28 years 1.

We’ve been close to contraction more than once during this expansion, as growth in GDP almost stalled, most notably at the beginning of 2014, and the end of 20152.

We have recently seen signs of slowing in the global economy stemming from the ongoing US trade war with China, the effect of tax cuts wearing off, and the Fed raising rates into the end of 2018.  But it’s been the effect of the trade war, in particular, that is showing up in the manufacturing sector. CFO confidence has been affected as well, which may mean companies are turning cautious on spending for growth initiatives.

Then, there’s the inversion of the yield curve earlier this year. This has been a reliable indicator preceding the last 7 recessions. Yield curve inversion, however, has told us nothing about the next occurrence, with those previous recessions varying in timing, magnitude, and duration. The lag time between inversion and recession has varied wildly between 6 and 22 months.

There is even doubt among economists that yield curve inversion remains a reliable indicator as interest rates around the world have been manipulated by central banks since the Great Recession. It just doesn’t tell us enough to make informed investment decisions.

Conversely, this negative data has been offset recently by impressive Q3 corporate earnings. As of October 28th, with 206 S&P 500 companies having reported earnings, 78% have topped analyst expectations, according to FactSet3.

The Commerce Department reported on October 30th that GDP in the US grew 1.9% in Q3, better than the expected growth of 1.6%. The same day, the Fed lowered its benchmark interest rates by another quarter-point. Is anyone even factoring in the possibility that the Fed could get rate policy right – tightening and loosening monetary policy based on economic conditions - and the expansion runs on for ten more years?

Since we don’t know when a recession will occur, how long it will last, how deep it will get, or how it will impact asset prices, we must create a prudent game plan that works in any economic environment.

Acknowledge that recessions are an uncomfortable, yet normal part of the business cycle. Remind yourself that one will occur sometime in the future and it will also end. Recessions shake out weak hands and provide opportunities to those with a plan.

Preparing mentally and emotionally will arm you with the confidence to get through the next one…and the one after that.

It’s important to have an emergency fund in any economic environment, but it’s even more important if your employment could be at risk or if you’re a business owner in a cyclical industry.

Typically, we recommend holding a minimum of 6 months of living expenses in cash, with retirees holding at least 2 years’ worth. Make sure you’re also holding enough in savings to cover any planned major purchases.

And, if holding a bit of extra cash now will prevent you from making destructive moves in your portfolio during a downturn, then raise even more now.

Reassess your risk/return profile for long-term goals and investment assets.

Understanding how your current investments have reacted during previous recessionary periods can be liberating. While no two recessions and market reactions are alike, you can at least form a basis for expectations and determine if you’re willing to withstand a similar drawdown in your investment portfolio.

If you’re not sure you can stomach this or if you’re close to drawing on your retirement fund, then it’s ok to modify your investment allocation to one you can live with during both up and down cycles. It’s important to pick a risk profile you can live with which can also deliver the return necessary to achieve your long-term goals.

Jane Bryant Quinn, the nationally recognized personal finance writer said, “The market timer’s Hall Of Fame is an empty room.” It’s tough to fight the historical upward trajectory in equity markets (as seen in the chart below) and no one can pick the top or bottom of cycles successfully. Just think of all the head-fakes and “imminent” recessions we’ve feared over the last ten years of our current bull run.

To reap the upside provided by stocks in your portfolio, you’ll just have to commit to suffering through the downturns. 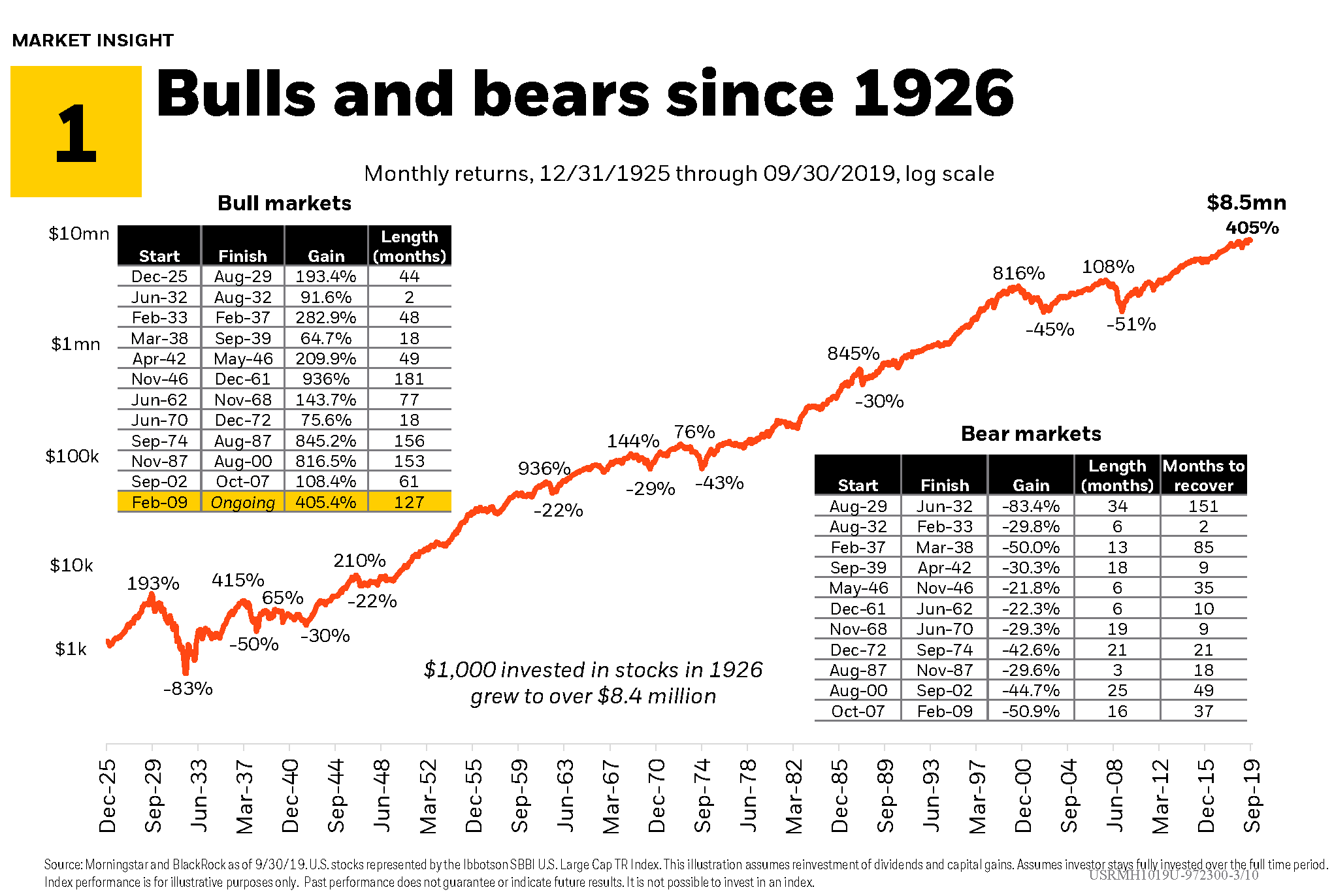 Further, the National Bureau of Economic Research (NBER) is our nation’s authority on recessions and their information is always lagging. It’s impossible to tell how bad things are in real-time or if a recovery is already underway. 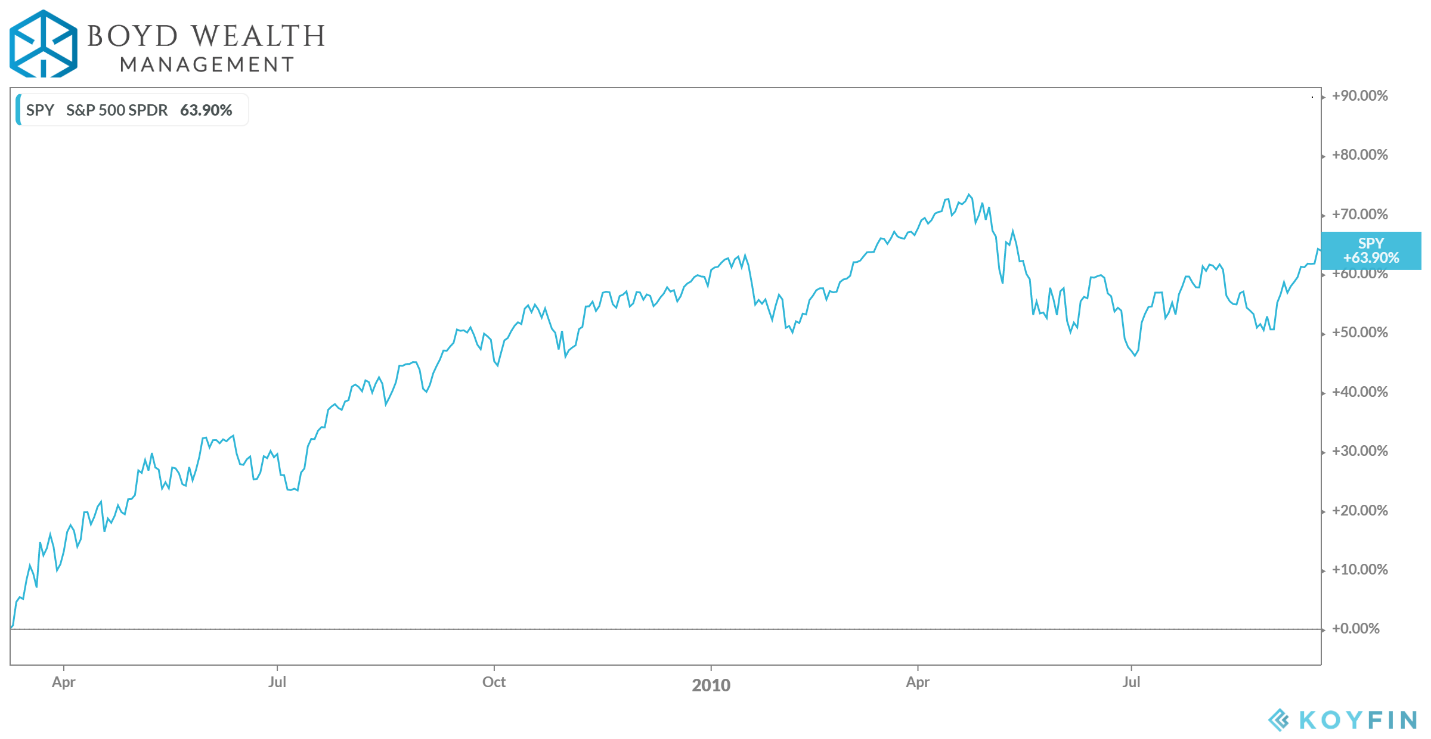 Recognize that volatility is an investor’s friend.

Take advantage of market volatility by rebalancing back to your target portfolio weightings. In Russell Investments’ 2019 study on the value of an advisor, they examined the benefits of a disciplined portfolio rebalancing strategy. 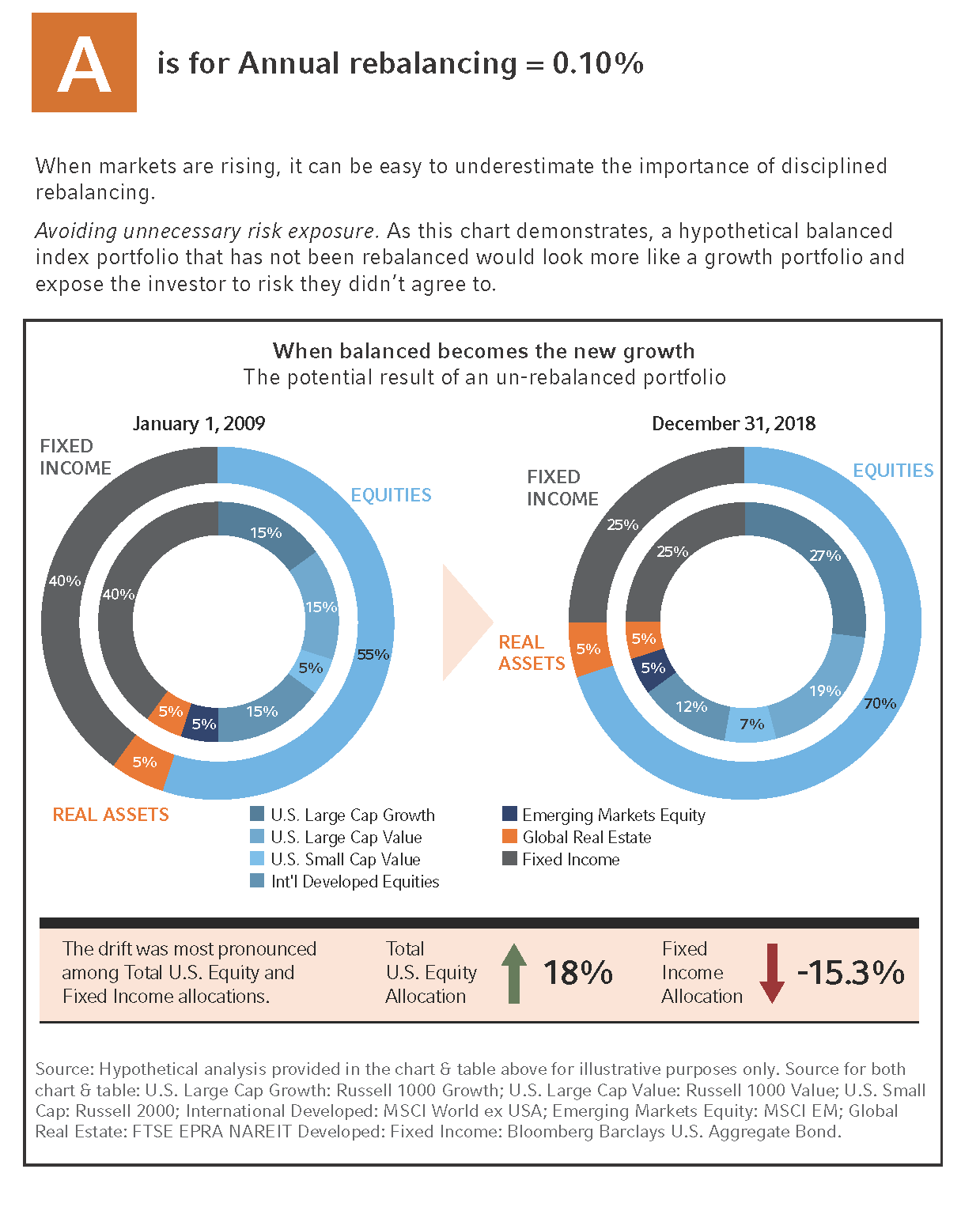 A balanced portfolio consisting of 60% stocks and 40% bonds in January of 2009, left untouched, would have morphed into a growth portfolio of 75% stock and 25% bonds by December 2018.

Remarkably, during this bull run where US Stocks dominated, the study showed that periodically rebalancing the portfolio back to initial allocation had benefits. Rebalancing increased return by .10% per year while reducing portfolio volatility (risk) by 1.7%. This is as close to a free lunch as you can get in investing.

If you’re actively contributing to retirement accounts, you’ll really appreciate volatility because you’re buying more shares in your portfolio at better prices. The most difficult but rewarding thing an investor can do is to keep contributing to a portfolio that is experiencing wild swings. History has shown investors that stick to their savings strategy have reaped rewards.

If you’re sitting on a pile of cash, perhaps from the sale of a business or an inheritance, it’s important to create a disciplined dollar-cost averaging strategy into a model asset allocation that will support your long-term goals.

Sitting in cash is a terrible strategy for long-term dollars needed to meet future spending objectives. Historically cash has underperformed inflation resulting in a slow and steady loss of purchasing power. I’ve covered this in detail here.

I often think about all the people who came to us for advice over the last 10 years who feared that another market correction or recession was just around the corner. Creating a systematic strategy for building a portfolio over time and sticking to this strategy has delivered positive results.

Fixed expenses are those that include items such as housing, transportation, groceries, and utilities.

Variable expenses are those items that can be reduced or eliminated during a recession and include travel, dining out, home services, and entertainment. Understanding what could be eliminated from the budget during a recession will leave you more confident and prepared when the time comes.

You are now battle-ready. It matters not when the next downturn comes because you have a plan.

We are here for you. We are committed to achieving positive outcomes for you and your family. Call or email to schedule a time to review your battle plan together.

The Standard & Poor’s 500® (S&P 500) is an unmanaged group of securities and considered to be representative of the U.S. stock market in general. An investment cannot be made directly in an index. The data assumes reinvestment of all income and does not account for taxes or transaction costs.

Past results are not indicative of future returns.