Apple Computers was founded in 1976 by partners Steve Jobs and Steve Wozniak, who are now household names. But most people don’t realize that there was a lesser-known third partner, Ronald Wayne.

The trio had worked together at Atari and shared a vision for the future of computer design and technology. However, five years prior to starting Apple, Wayne suffered the financial consequences of a failed slot machine business. Still stinging from that loss when he partnered with the big-dreaming Jobs and Wozniak, Wayne soon realized that he was personally liable for a portion of the company’s new $15,000 credit line.

Shortly after forming their venture, Wayne wanted out. The specter of that $15,000 debt was too great for him. So, he sold his 10% stake in Apple back to the two other founders for a mere $800.

In retrospect, that was akin to throwing away a winning Powerball ticket (or several of them!). Today, Wayne’s original stake in Apple would be worth billions.

While most people are never faced with an investment decision of that magnitude, plenty of investment mistakes keep investors from realizing their full potential.

Here are the 5 most common investment mistakes I see repeatedly - and how to avoid them:

1. Not identifying the real risk.

There is a price to pay when making any investment, and that price is risk.

Whether you’re accumulating wealth or living off the wealth you’ve created, you must decide where you want your risk. Do you want it now or later?

For instance, having all your money in cash may feel like a risk-free move. It’s true that your principal is protected in an FDIC insured bank account, but the glaring risk when holding cash over the long-term is the inevitable loss of purchasing power.

Cash (and Treasury bills) have returned 3.3% per year since 1926, which is slightly above the average inflation rate of 2.9%1 over that same period. But once the tax man is paid, the real return is significantly lower than the rate of inflation.

Today, you can earn close to 1.5% in a money market account…all while inflation rages on at 9.1%. It may seem like hoarding cash is a risk-free proposition today, but all of the risk comes in the long-term.

On the other hand, there’s also an inherent price to pay when you invest in stocks. That bill comes due when investors must weather periods of volatility, fear, and uncertainty. The price you pay is watching your principal regularly swing in value, sometimes to the extreme. But, unlike cash, the risk is in the short-term.

Investing in the stock market may look easy enough, but when you look back over the last 90 years, it was anything but.

Since 1926, US Large Cap stocks have delivered an average annual return of 10.55%2. But the real price of those inflation-busting returns has been living through 17 separate downturns along the way, 9 of which exceeded 20%!

The key is to never forget why you take that risk. You’re aligning your investing strategy with your long-term goals: financial security, travel, income, and legacy.

Fear of Missing Out (F.O.M.O.) has destroyed more wealth than all of the other mistakes combined. It’s easy to catch F.O.M.O. and chase investment fads when your buddy becomes an overnight internet stock millionaire. Or when your sister is getting rich buying and flipping houses. Was that your neighbor who just rolled by in a brand new Lambo he purchased with his crypto gains?

Fads come and go, and it takes strong discipline not to jump on the bandwagon. But, more often than not, these “investments” end with the bursting of a spectacular bubble.

You’ll know something is an investing fad (and should run the other way) when you see the following:

And then, pop! The bubble inevitably bursts.

Of course, no one talks as loud and proud about their big losses, so there’s no such thing as reverse F.O.M.O.! 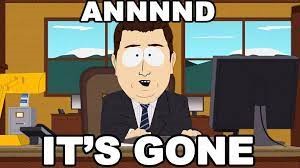 3. Not sticking with a well-defined plan.

Even time-tested, academically researched, and diversified portfolios lose money from time to time. But human beings are not wired to accept loss very well. In fact, studies prove that investors feel the effect of losses TWICE as much as they enjoy the satisfaction of gains.

Our primitive ancestors avoided danger wherever possible by eliciting the amygdala portion of their brains - the source of fight-or-flight. Today, this same part of the brain shouts at us to sell stocks and hide when the market drops sharply or screams at us to double down when the market is running hot.

Simply acknowledging the intense feelings you experience when faced with a normal market downturn will help you fight the urge to abandon your well-researched and carefully constructed investment plan.

Moving in and out of different asset classes based on emotion, fear, or external circumstances has proven to be incredibly destructive to wealth.

It’s always appropriate to review and update your plan periodically, but you can’t abandon it when you need it most.

4. Waiting too long to get started.

Take two childhood friends, Sally Saver and David Delay (you already see where this is going).

At the age of 25, Sally begins investing $500 per month and earns an average return of 8% per year. She does this for 20 years and then stops contributing. She then lets the money continue to compound at 8% for another 20 years to age 65. Sally Saver ends up with an account balance of $1,450,993.

David doesn’t begin saving until age 35. At that point, he saves the same $500 every month and earns the same hypothetical 8% per year. But unlike Sally, he never stops saving for 30 years straight.

Invest early and invest often. Save as much as you can and let the power of compounding take over. You don’t have to outthink the market – you just need to be in it as early as possible and let time do the work for you.

Many people allow their narrow view of the world to get in the way of prudent investment decisions.

Morgan Housel, author of "The Psychology of Money," says, “Your personal experiences with money make up maybe 0.00000001% of what’s happened in the world, but maybe 80% of how you think the world works.”

That’s a sharp disconnect and one that leads to costly financial mistakes.

Take the relationship between politics and investing as an example. How many people missed out on impressive returns under the Obama administration or the Trump administration because they believed the President of the United States would negatively impact the economy and stock market?

And yet, S&P 500 average annual returns under both administrations were astonishingly similar at 16.3% per year. 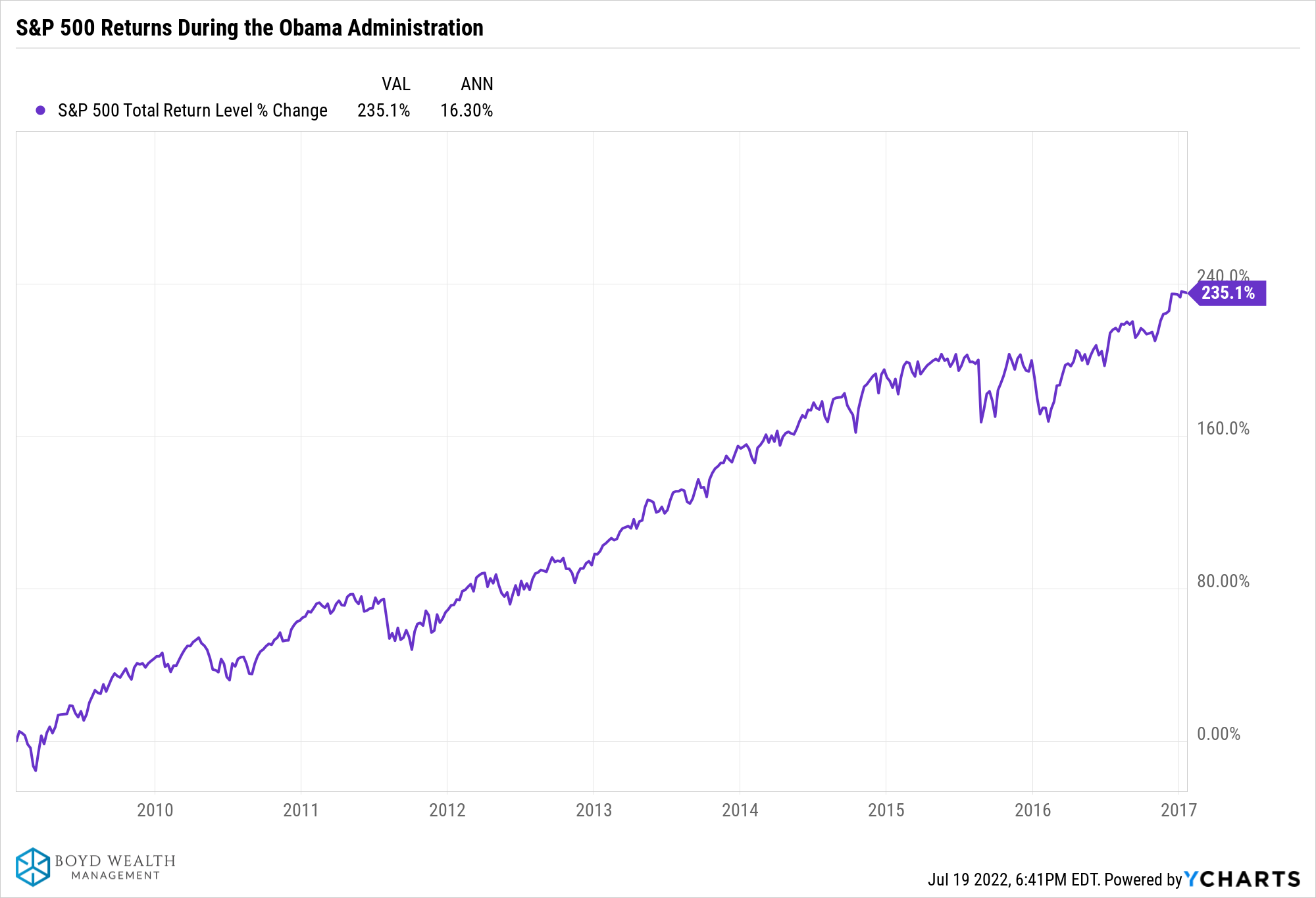 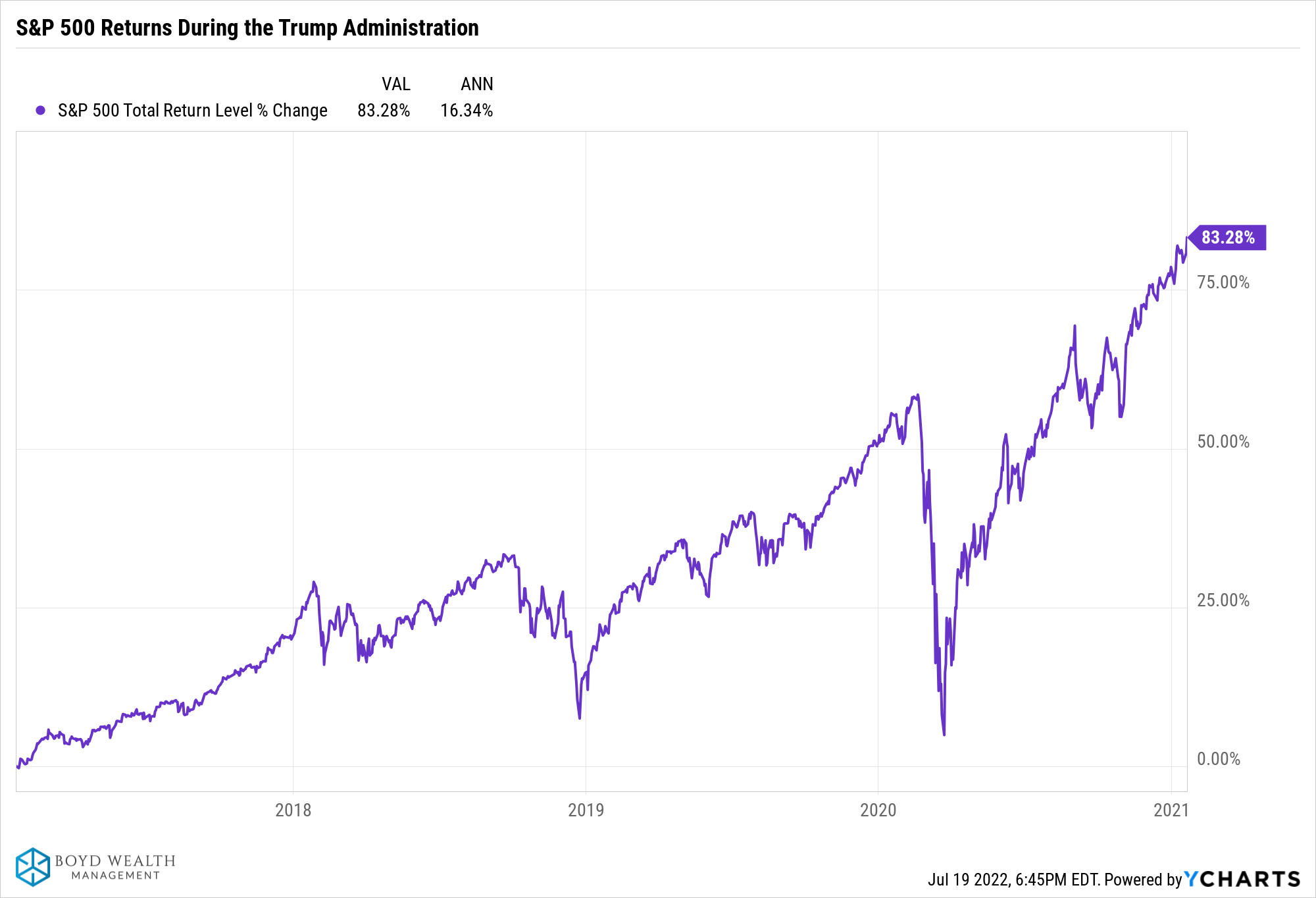 Investing is difficult enough without adding skewed perception to the equation, even when you’re directionally correct. For instance, assume that in the beginning of this year, you accurately predicted inflation would skyrocket.

So, as a hedge, you bought gold and bitcoin. 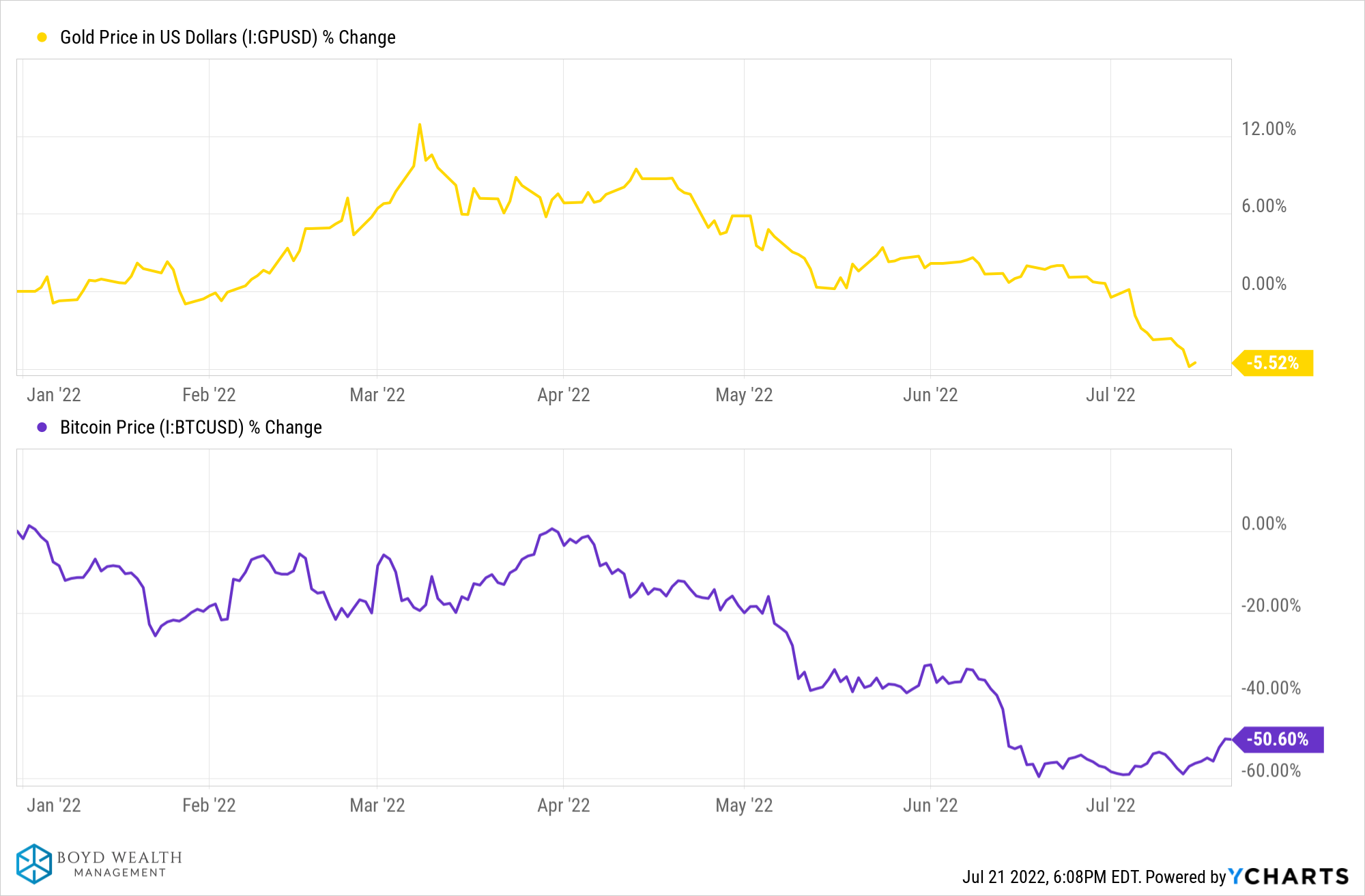 We’ve experienced the highest inflation in 40 years, and these purported inflation hedges are negative for the year. There are so many variables influencing markets that it’s near impossible to predict how any asset class will perform in the short-term.

Instead, it’s best to build an evidence-based diversified portfolio that provides the best chance to succeed over the long-term. 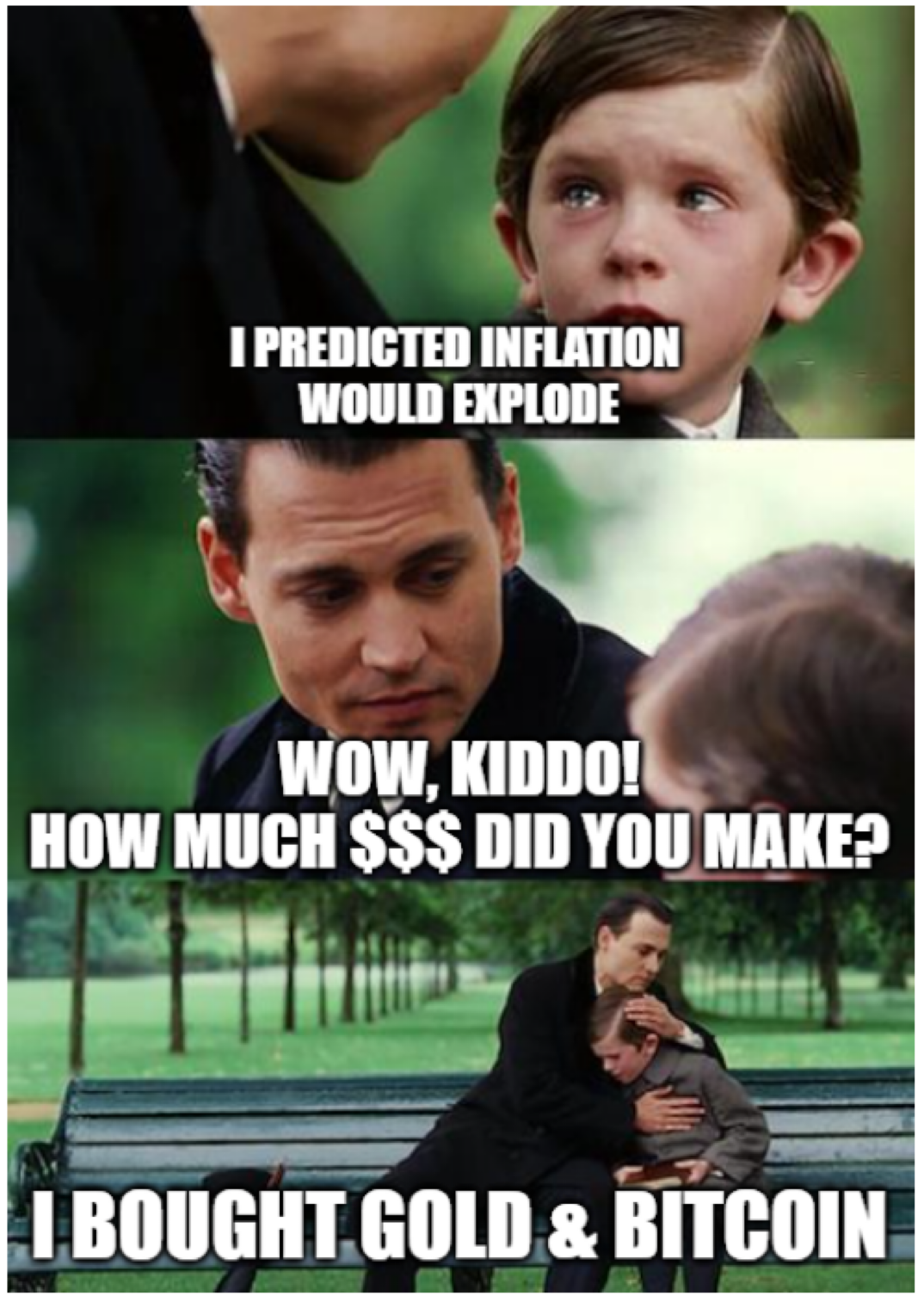 It requires the ability to ignore an excited crowd and to block out negative emotions. It requires acknowledging that there are many variables in the world that you can’t understand and don’t control.

In the end, it’s best to create a plan, follow a data-driven investment process, and stick with it through thick and thin.

I hope this helps you avoid these mistakes along the way.