Spurred on by Reddit traders, crypto zealots, and even celebrities, the lure of easy riches are bringing excitement - and a flood of dollars - to highly speculative assets. After three rounds of stimulus, zero percent interest rates, and an end to the pandemic in sight, tiny (asset) bubbles are forming in certain sectors.

It’s the perfect storm of easy money combined with an alluring click-and-get-rich narrative.

Of course, deep down we all know that effortless wealth is a mirage, but it can be too irresistible for some.

Getting rich slowly is just, well…boring. Even mentioning a diversified portfolio at a cocktail party might get you kicked out. It’s just that boring (we prefer to call it ‘disciplined’) works so well in investing.

For high-net-worth families who have already made it, I concede that it can be fun and exciting to speculate with a small bit of capital. Just keep it to the fun money and understand the capital invested in a high-flying investment will likely be gone one day.

As Warren Buffet put it, “If you risk something you need in order to gain something you don’t need, that is foolish. It’s just plain foolish.”

Then again, as we saw in the dotcom bust, some of these media darlings might work out. It may just take a significant loss of capital and years and years of patience for that to happen. That’s why it’s called speculation and not investing.

Today, we’ll talk about a few of the tiny bubbles you’ve probably heard so much about lately.

What piece on speculative bubbles would be complete without a discussion of cryptocurrencies?

The most famous of all cryptocurrencies is, of course, Bitcoin. Probably the most exciting and useful development coming from Bitcoin is the blockchain technology that it’s built upon.

The basic theory behind Bitcoin, and cryptos in general, is for a decentralized medium of exchange or currency. Since it’s a worldwide currency run on computers spread across the planet, governments or central banks (theoretically) won’t be able to impact its value. In fact, the staunch advocates believe bitcoin will overtake the US dollar as the world’s reserve currency.

Because of this optimism – and the notable endorsement of icons such as Elon Musk - Bitcoin has appreciated from just pennies per coin in 2010 to its all-time high earlier this year of about $58,000 per coin. 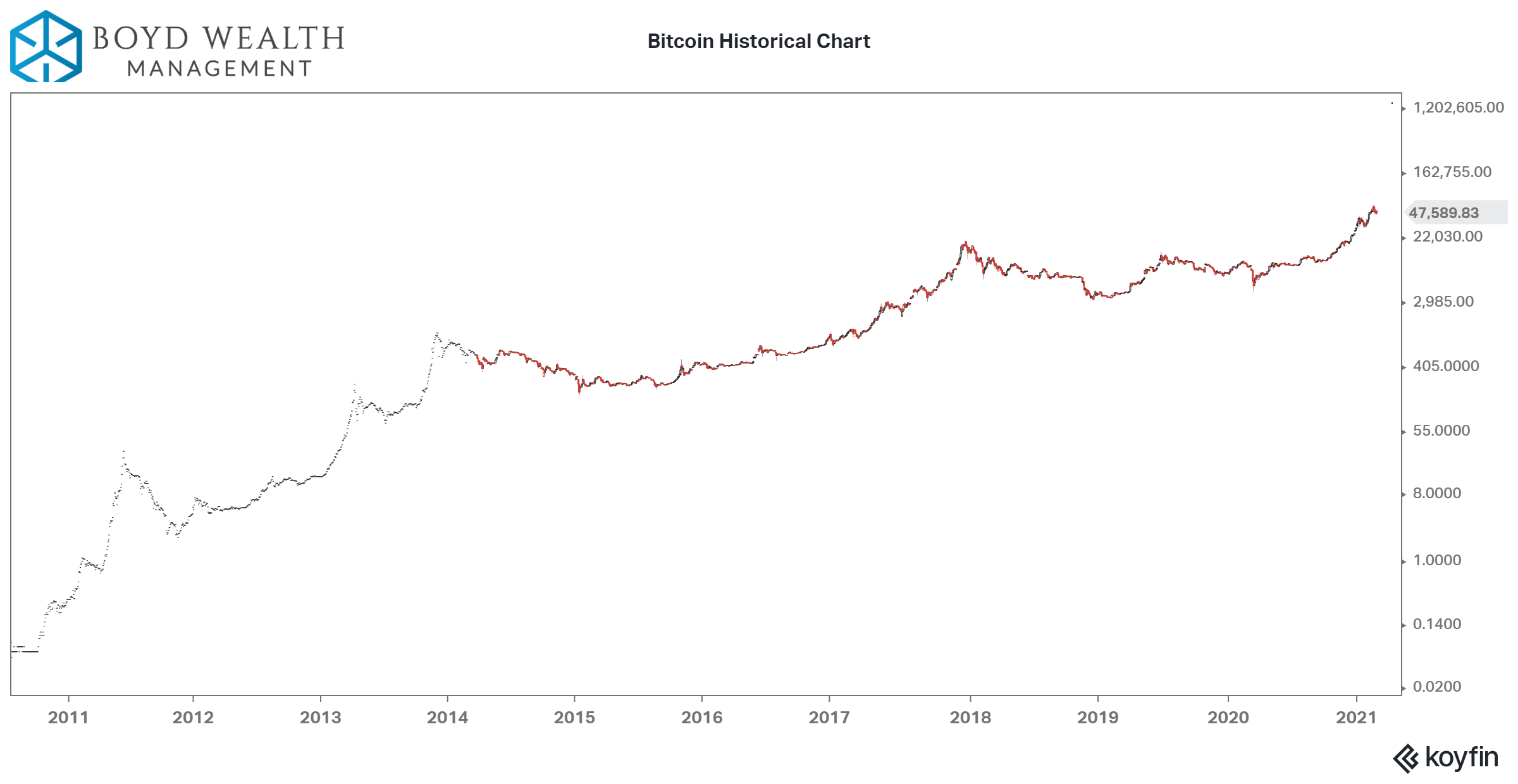 However, this spectacular runup also comes with a dark downside. Bitcoin has previously suffered significant, catastrophic downturns. The cryptocurrency has been through three 80%-plus drawdowns since 2010, with one of those being greater than 90%. That means the value of the coin has lost more than 80% of its value on three separate occasions. 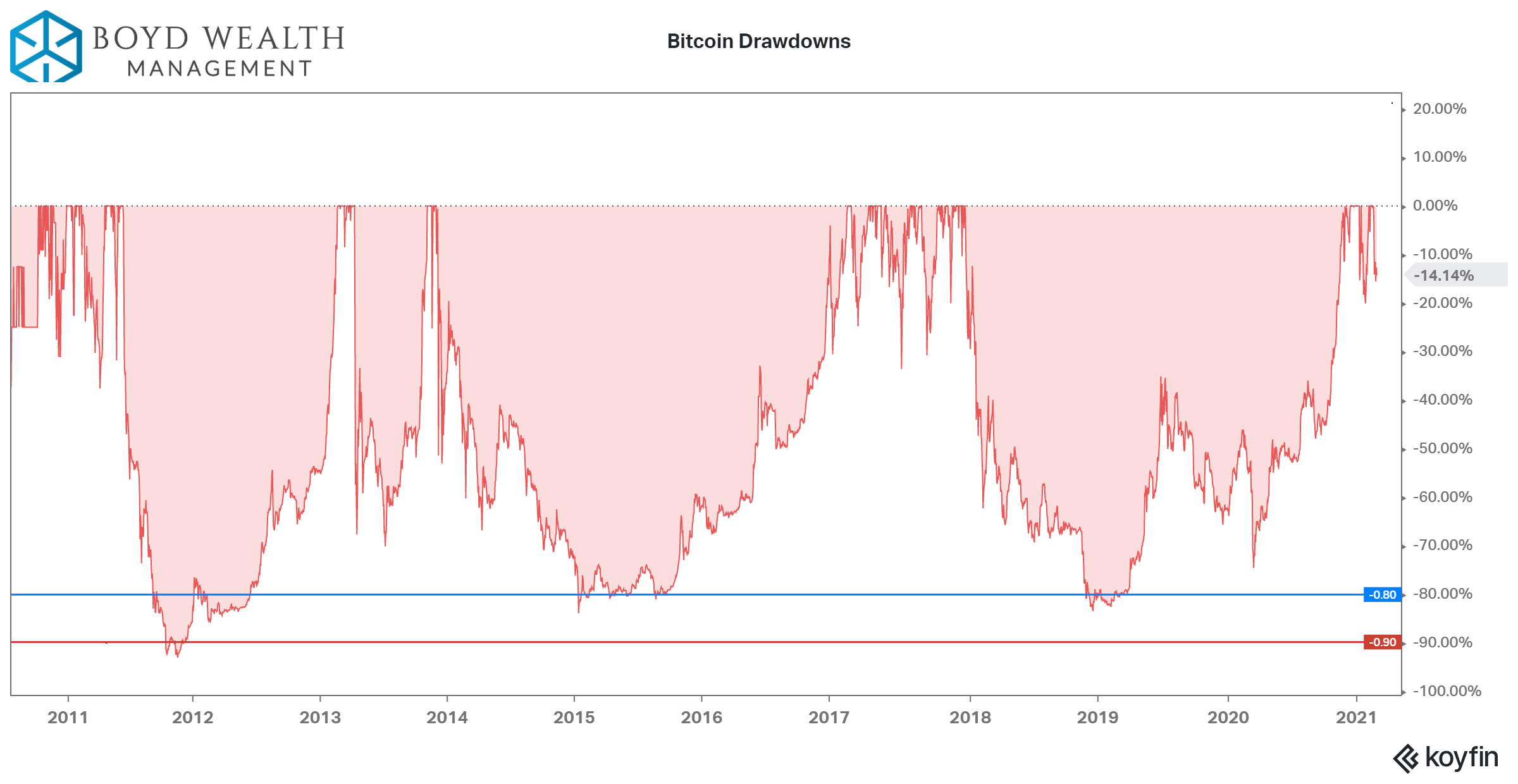 So far, the digital currency has rebounded each time, but it’s important to keep in mind that another 80% drawdown would take the crypto coin from ~$50,000 to $10,000. Few investors can tolerate that kind of volatility, one of the chief reasons why Bitcoin is not currently included as an asset in our diversified portfolios.

For those that would point out correctly that stocks can also go down 80% or more, I agree. However, I would rather hold a basket of stocks or bonds that are backed by physical assets – plant, machinery, equipment, inventory, etc., than a concept which has so far only been backed by speculation.

Another argument for Bitcoin is that it serves as a store of value. However, it has historically failed to act as a hedge against the economy or equity markets during times of financial stress.

A store of value should exhibit a zero or negative correlation to stocks. When stocks zig, a store of value either does nothing or it zags. But Bitcoin fell off a cliff right along with stocks during the COVID lockdowns last February and March. (S&P 500 Index in red, Bitcoin in blue, Gold in yellow). 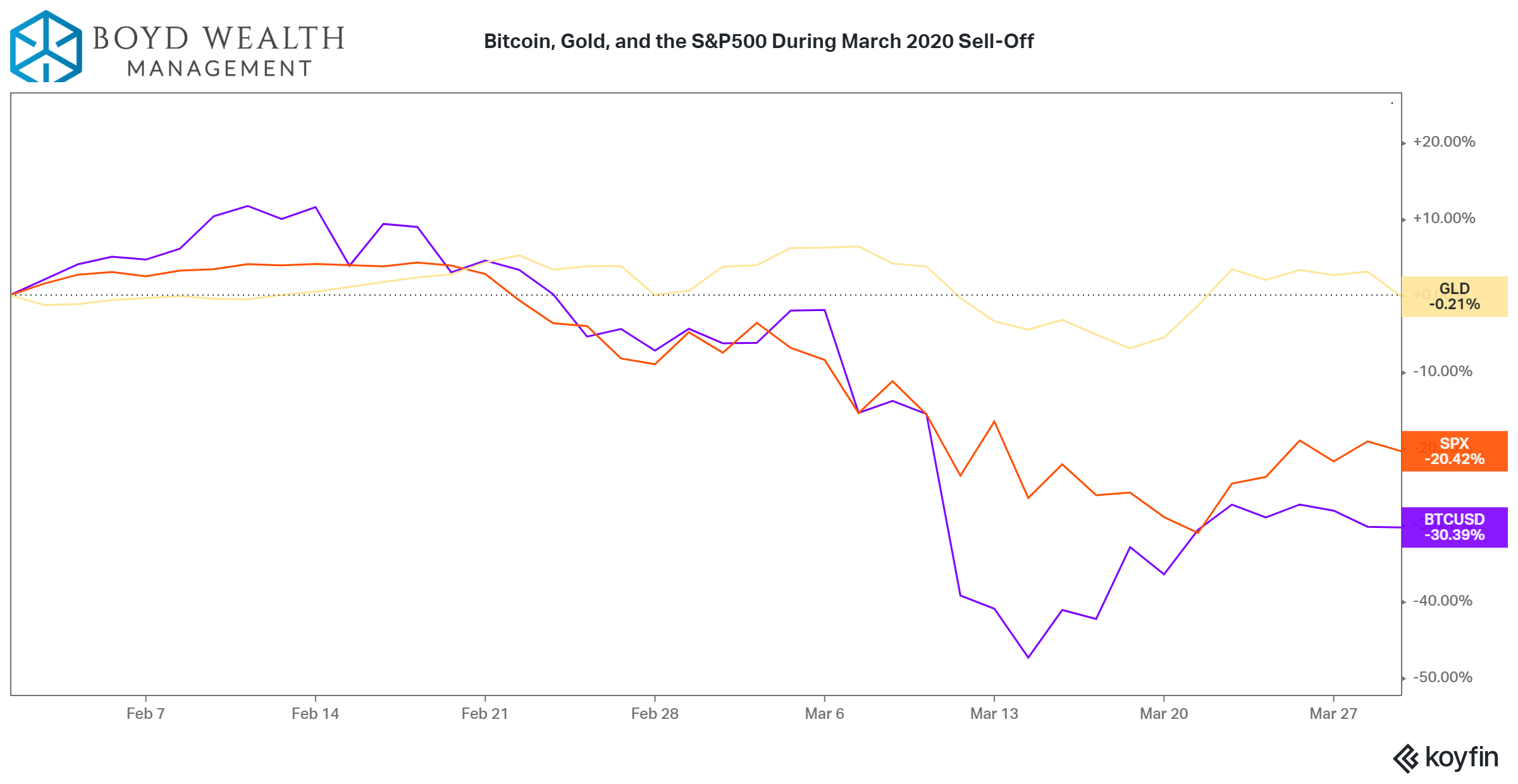 Conversely, gold, which has long been considered a store of value, fared much better during the same timeframe (February 1st 2020 – March 31st 2020).

Lastly, there is just too much government risk to include bitcoin in a diversified portfolio. The US government currently controls the world’s reserve currency, the US dollar. Even though you may be able to buy Tesla with Bitcoin, the government has given no indication they will legitimize it (other than to tax any profits, of course.)

Treasury Secretary Janet Yellen said just last month “to the extent it is used I fear it’s often for illicit finance. It’s an extremely inefficient way of conducting transactions, and the amount of energy that’s consumed in processing those transactions is staggering.”

To put her critique in perspective, Bitcoin can process 4.6 transactions per second while Visa handles 1,700 per second (with capacity for much more).

Currently, the Federal Reserve is investigating an alternative digital currency. It could be an efficient solution for the estimated 7.1 million people in the US who don’t have bank accounts.

“I think it could result in faster, safer and cheaper payments, which I think are important goals,” Yellen said.

To stress the importance of that statement, that’s the Treasury Secretary of the United States saying they are likely to create and legitimize their own cryptocurrency.

Just don’t tell that to the Bitcoin Bandits or you’ll receive one of these in your inbox:

Special Purpose Acquisition Company (SPACs) are the latest craze. SPACs, also known as “blank check companies” have been around since the 1990s. But interest exploded during the pandemic as excess capital looked for a home.

From the New York Times:

“SPACs are shell corporations that list on a stock exchange, with the goal of buying a private business and taking it public. In essence, a SPAC is a way to do an I.P.O. without all the time, expense and regulatory oversight traditionally required. The sponsors of a SPAC typically have two years to identify acquisitions or must return their investors’ money.”

Celebrities from Jay Z to Alex Rodriguez, and even Colin Kaepernick have SPACs. They have lent their names to these publicly traded securities in hopes that a successful merger with a real company will deliver riches.

I don’t know about you, but I stopped taking advice from celebrities after Ja Rule ruined my Fyre Fest experience.

While many of these SPACs may ultimately deliver return to shareholders, many will fail as they chase poor deals due to a limited supply of acquisition targets.

Maybe you haven’t heard of this one yet, but you will. At first, I thought this had something to do with mushrooms, but no. Instead, non-fungible means the asset is unique and isn’t readily interchangeable.

In short, people are buying and selling digital assets such as pictures, GIFs, videos, and sports cards. Ownership of these online items are recorded on the blockchain.

There’s attention here because (of course) people are making money, sometimes big money. In October 2020, an art collector bought a 10 second video artwork for $67,000 and sold it four months later for $6.6 million.

From a copyright perspective, NFTs don’t transfer title of a digital version of the asset. It’s like buying a print of a famous painting. It’s hard to see how cash flow could be generated from owning it.

So, what is one to do with this asset?

Try to sell it to someone else for more money!

There’s certainly appeal for a collector, similar to tangible art or exotic cars, but the money flowing into this is more about acquiring easy riches than collecting NBA highlights.

“The market can remain irrational longer than you can remain solvent.” – John Maynard Keynes

There’s no reason these tiny bubbles can’t continue gaining steam and garnering media attention. That’s the exact nature of bubbles: they typically grow into a fever pitch that is so high, even the most astute, conservative investor jumps into the pool. Then it bursts – suddenly, totally. Pop!

As I said before, if you must delve in, tread very lightly into these areas. Remember, if you have some early success it can be incredibly tempting to bet even more money. And then, even more money.

Instead, have a plan for how much you’ll allocate and how you’ll react when/if the tiny bubble bursts.

As part of our ongoing due diligence process, we’ll continue to monitor these and all major asset classes. Our goal is to help you accomplish your financial goals with the highest probability of success. Achieving the highest possible return each year regardless of risk is never the objective.

I know…boring. But this is your financial security – not a cocktail party.

So here's to the golden moon

And here's to the silver sea

And mostly here's a toast