Vladimir Lenin was a Russian revolutionary and politician. He led Soviet Russia and the Communist Party from 1917 to 1924. Ironically (or not), he once said, “There are decades when nothing happens; and there are weeks when decades happen.”

I think that’s an apt description of current events. With all that’s going on in geopolitics and markets so far this year, it can be a challenge to sift through the mountain of information out there. I wanted to share a few pieces we’ve been reading (and listening to) this week to lend the right perspective.

Morgan Housel is my favorite finance writer. Whenever I read something of his, I instantly wish it was me who wrote it. He simplifies and demystifies money and investing in ways few can.

Morgan is a partner at the Collaborative Fund and a former columnist at The Motley Fool and The Wall Street Journal. He is a two-time winner of the Best in Business Award from the Society of American Business Editors and Writers, winner of the New York Times Sidney Award, and a two-time finalist for the Gerald Loeb Award for Distinguished Business and Financial Journalism.

I’ve referenced Morgan several times over the years in our blog posts and his book The Psychology of Money has sold more than one million copies, and has already been translated into more than 30 languages.

He sits down with Tim Ferriss in this interview which has something for everyone, regardless of investment experience. This is probably a good one to share with your young adult children. It’s 3 hours long, but at 1.5 times speed on your podcast player, I know it will be worth your time.

Notes on the Week Ahead

We are already experiencing the short-term effects of the broad worldwide sanctions imposed on Russia due to their invasion of Ukraine. The most notable impact thus far has been on energy prices.

In this week’s “Notes on the Week Ahead”, Dr. David Kelly from JP Morgan Asset Management breaks down the factors for this move, especially the impacts to Europe.

“In 2019, Russian imports accounted for roughly 26% of European oil consumption and 37% of European natural gas. Europe’s natural gas dependence on Russia is particularly problematic because, while oil is a global commodity, natural gas, at least in the short-run, is a regional one.”

In short, Europe will need to develop a longer-term plan to source this valuable commodity as these massive price increases are already taking their toll on consumers. European countries are now facing an increased risk of recession this year.

Here in the US, energy price spikes (along with other commodities) mixed with a potential recession in Europe will be painful but remain unlikely to cause a recession.

“US exports to Europe…account for less than 11% of U.S. GDP and, as was the case with the Asian Financial Crisis of the late 1990s or the European debt crisis the last decade, the U.S. economy has generally been able to weather sharp downturns in other global economies.”

If you have 6 minutes, this a great read on the economic impact caused by the conflict in Ukraine.

War: What is it Good For? Absolutely Nothing

Liz Ann Sonders, Chief Investment Strategist at Charles Schwab, and her team have an excellent note out this week.

Despite recent market volatility, the equity put/call ratio (bets against versus bets for the market) is not yet showing signs of panic. The S&P 500 as of market close March 9th is in a 10% correction and the tech-heavy NASDAQ is off 16%. While corrections never feel great, this one for a variety of reasons has felt worse than it actually is…so far. 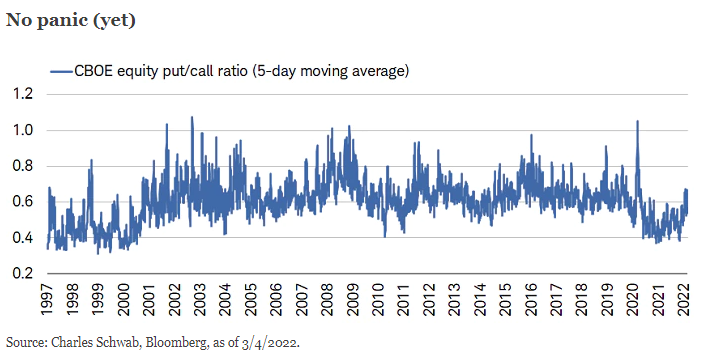 As you look below the surface of the indexes, the Russia/Ukraine conflict is exacerbating a market rotation which was already under way at the end of last year. The Fed has clearly signaled a tightening of monetary policy to control high inflation. Liz Ann demonstrates there’s already a stealth bear market within the NASDAQ and Russell 2000 (small caps), “as the average member’s year-to-date drawdowns has amounted to 26% and 25%, respectively.” 77% of NASDAQ stocks are in bear territory (20% drawdown or greater) and it’s 85% of stocks for the Russell 2000.

From a purely economic standpoint, the Russian conflict with Ukraine comes at a tough time as inflation was already stubbornly high and economic growth was moderating. Markets could be in tough spot for a while longer.

The Day the Market Bottomed

Michael Batnick, Director of Research at Ritholtz Wealth Management, has an excellent chart out this week. From the March 9th, 2009 financial crisis low, the market has risen 700%. It would be easy to look back over this period and think those returns were straightforward, but there were plenty of reasons along the way to want to sell stocks.

He reminds us, “the darkness always gives way to light because hope is more powerful than despair. People never lose the motivation to provide for their families and to make the future better than the past.” These risks and portfolio downturns are the price of admission in exchange for the historical compounding derived from investing in stocks.

Wishing you a fantastic weekend and a quiet week ahead.